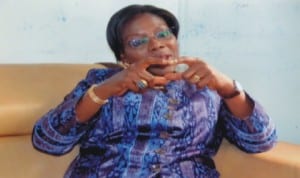 Democracy At 15: The Leaders’ Perspective

Developing A Nation Is A Complex Task- Prof Nimi Briggs