The three workers’ union
at the University of Nigeria, Nsukka, (UNN), have indicated their plan to boycott every activity lined up to mark the end of the administration of the Vice Chancellor, Professor Bartho Okolo,  by  June this year.
In a press briefing addressed by chairmen of the Academic Staff Union of Universities, ASUU, Non-Academic Staff Union, NASU, and the Senior Staff Association of Nigerian Universities, SSANU, Comrade Ifeanyichukwu Abada, Comrade Geoffrey Ugwu and Comrade Paul Erua, respectively, they described as laughable plans by professor Okolo to drag them to court.
They also chided Okolo for leaving substance to pursue shadow, adding that the Vice Chancellor had in different letters addressed to the union leaders by his lawyer, M.O Chukwumezie, threatened to drag them to court for labeling him as a corrupt and inefficient Vice Chancellor.
According to them, Okolo said the union leaders should not only apologise to him in at least five national dailies, but also pay him the sum of N800,000,000 (eight hundred million naira) for the losses occasioned to him by the publications credited to them.
The VC, they went on, said if they failed to do so, he shall not hesitate to institute and maintain an action against them in court.
However, in their joint press briefing on Thursday, the union leaders insisted that the “Vice Chancellor is a clear manifestation of a corrupt university administrator”.
They described his call for apology as a child’s play and a gimmick intended to threaten, weaken and divert their attention from his alleged corrupt practices in the university.
The unionists, therefore, renewed their call for the constitution of a judicial panel of enquiry to probe the VC’s 5-year tenure at the UNN.
The workers said the decision was necessary owing to the VC’s alleged illegal activities, ranging from phony staff recruitment/ replacement, illegal meddlesomeness in staff emoluments, siphoning of university money through consultancy services to non-accountable of funds meant for some projects.
Their words: “As a way of showing that we are not comfortable with his administration our members have decided to boycott the proposed send-forth of the outgoing VC. The outgoing VC stopped payment of check-off dues of unions in the university because we tell him the truth”.
Continuing, the unionists further said: “If Okolo claims that what were published in electronic and print media after our press conference in Enugu on October 9th 2013 are false he should go to court. If he also claims that what he said at AIT programme, Kaakaki, is false, let him go to court.
“ASUU, SSANU and NASU is telling the outgoing VC to go to court if he feels the allegations against him on that press conference and what we said on AIT on kaakaki programme January 14 are defamatory and false. We have gathered all receipts of his illegal financial transactions which we will tender as evidences to back our allegations if he goes to court”. 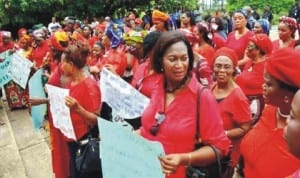 Members of Women for Peace and Justice, South-East Zone, during a peaceful rally over the abduction of Government Secondary School girls, Chibok in Enugu , recently. Photo: NAN