President of Nigeria Squash
Federation (NSF), Adamu Erena, has said that the 2014 African Squash Championship, earlier scheduled to begin on May 5 in Abuja, would now kick-offon May 25.
Erena told newsmen in Abuja that the postponement was as a result of the issue of insecurity in the country.
“This is the first time Nigeria was selected to host the event by the Squash Federation of Africa (SFA), but the participating nations wrote to the federation about their safety and the need for the event to be postponed,’’ he said.
The NSF President, however, said the event had been rescheduled for May 25 to May 30.
“We were to have it beginning on May 5, but it fell around the same date the World Economic Forum on Africa was to begin.
“So, we decided to postpone it to May 25 in view of that issue and because most member-nations were complaining about their safety in Nigeria.
“Though, the federation had written them that their safety was guaranteed, but even with that only three countries sent in their acceptance forms,“ he said.
Erena told newsmen that 15 countries were expected to participate in the championship, but only three countries had so far indicated interest in participating in the competition.
He further said if the federation did not get a feedback by next week the African federation would have to sit and decide if Nigeria should still host the competition.
“We will try to convince them that Nigeria is safe for the competition, and if they do not accept, it will be left for the SFA to decide,” the federation president said.
He, however, said if the feedback was positive, the NSF would write all the country’s security agencies to keep them informed about the event.
“This is in order to ensure adequate security at the venue of the competition,’’ Erena said.
He however told newsmen he was optimistic that the SFA member-nations would send their acceptance forms for participation in the competition.
The 2014 edition of the African Squash Championship is scheduled to hold at the Abuja National Stadium. 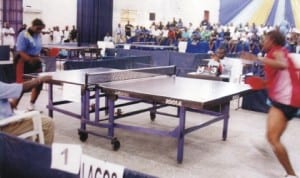