The Rivers State
Commissioner for Information and Communication, Mrs Ibim Semenitari, has proposed an inclusive educational programme for all members of the society.
Semenitari who said this last weekend during the Third Founder Day celebration of Christie Toby Inclusive Education Centre at Iriebe, said that every human being has ability and disability and  therefore must be provided with the opportunities to develop his potentials.
The commissioner said that the Christie Toby Inclusive Education Centre was set up to enhance the productivity of every human being and charged parents to continue to support the centre in the realisation of its set goals.
She commended the Rivers State Governor Rt Hon Chibuike Rotimi Amaechi and his wife Dame Judith Amaechi as well as the Rivers State Sustainable Development Agency (RSSDA) for their support for the centre.
Semenitari also used the occasion to call for continuous prayers for the girls abducted by Boko Haram from Chibok in Borno State and expressed the hope that God will bring the perpetrators to justice.
Also speaking, the managing director/chief executive officer of ABEC Group of Schools, Dame (Dr) Christie Toby, said that the centre was part of the effort to take education to the doorstep of every one.
Toby said that every child had a potential irrespective of his physical ability, stressing that the centre is out to harness the potentials in every child.
The wife of the former Deputy Governor also disclosed plan by the management to introduce learning to the centre and called on parents of children with physical disabilities to bring them to the centre.
Earlier, the principal of Christie Toby Inclusive Education Centre, Mr Oladayo .O. Thompson had said that the school at present has 82 students, 39 regular and 43 with special needs.
Thompson said that, the school also registered her first set of students for Junior NECO and State WAEC examination in 2013.
According to him, out of the six students registered, two are deaf, one visually impaired and three regular. 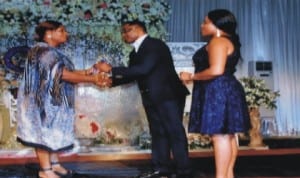 Mrs May Okokpa (left), presenting an Award of Heart of Gold to Austine Baribor Gbaraba (middle), during Red Ball 2014 in support of Diabetes Management, Awareness and Prevention organised by Eve Afrique magazine in Port Harcourt last Sunday. With them is Gbaraba’s wife. Photo: Dele Obinna