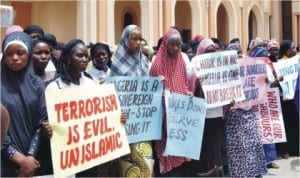 Christian and Muslim ladies in a peaceful protest over the abduction of Chibok School Girls in Bauchi on Monday.