The Farm Operations Co-
ordinator of Songhai Rivers Farms Initiative, (SRI), Mr Tammy Jaja, has said that inability of farmers to access government agricultural funds was capable of making farmers produce below expectation for the nation’s food needs.
Jaja stated this while speaking recently in a lecture presented at the University of Port Harcourt, during the 2nd Niger Delta Conference and the 1st induction ceremony of 21 members into the Institute of Natural Resources, Environment and Sustainable Development, (INRES).
He explained that without access to such agricultural funds, farmers, especially the subsistence ones that dwell in the Niger Delta region would not be able to produce large quantities of food stuff.
The three-day event with the theme: “Optimizing the Utilisation of Natural Resources of the Niger Delta and Managing Flood-induced Pollution, Jaja said that it was time for the government to become more sensitive to the plight of poor subsistence farmers in the Niger Delta.
According to him, the essence of setting up agricultural funds would be defeated if rural farmers find it difficult to access such funds for the development of their farms.
“There is no point setting up agricultural funds without allowing poor rural farmers in the Niger Delta to have access to them.
“No Single farm can feed the entire nation, and so our rural farmers must gain access to agriculture funds which give financial support to their farming activities,” he said.
While lamenting the bureaucratic procedures that characterize farmers’ access to funds, he advocated for the elimination of such a process, noting that they have become some of the reasons why many people do not want to go into farming.
Pointing out other challenges faced by subsistence farmers in the Niger Delta, he said non-engagement of key stakeholders in decision-making, limited research, top-bottom approach to policy making, environmental issues, improved seedlings, land tenure system and lack of training for farmers among others were the major challenges faced by the farmers.
The SRI Farm Operations Coordinator further explained that despite the fact that farmers were the key stakeholders in agriculture, they do not receive agric training and do not even know how to source for agricultural funds.
“The agricultural sector has other challenges which include absence of research and development, environmental constraints, the frustrating land tenure system of 1978, gender issues in agriculture, non-implementation of research findings, poor farmers’ linkage with the market as well as other numerous challenges” he said. 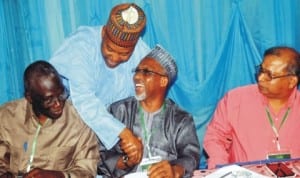