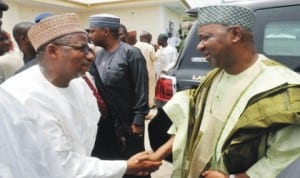 Bauchi
The Nigeria Union of Journalists (NUJ) has called on all
politicians and political parties to team up against insurgency and other security challenges bedevilling the country.
The union in a nine point communiqué issued at the end of its national executive council meeting in Bauchi recently urged politicians and the supporters to be mindful of inflammatory statements that are capable of jeopardising the corporate existence of the nation.
NEC further appealed to the striking lecturers of Polytechnics, Colleges of Education and the Federal Government to urgently resolve all the grey areas of disagreement, to enable the resumption of academic activities in the various affected schools in the interest of the students and the nation at large.

Benue
The Benue State House of Assembly has appealed to the
Nigerian Air Force, Tactical Air Command (TAC) Makurdi, to halt the demolition of houses at Akpen village and its environs. The village is in the suburb of Makurdi.
The appeal followed a motion of urgent public importance moved by Mr Benjamin Adanyi, a member representing Makurdi South constituency.
Adanyi told the house that the command had demolished houses at Akpen village, pointing out that as at the time he visited the area, five houses were demolished, rendering the occupants homeless. He said members of the community were in dispute with the command over the parcel of land, adding that the matter was before the assembly.

Gombe
The Society for Family Health (SFH), a non-governmental
organisation, says 35 per cent of expectant mothers in Gombe State delivers their babies in hospitals across the state.
The society said that the figure, which emanated from its monitoring and evaluation of public health facilities, represented an increase from the 28 per cent recorded in 2011.
Managing Director of the society, Mr Bright Ekweremadu, said this in Gombe while presenting the mid term report of the Gates Maternal and Neonatal Health Care project in the state.
According to him, at the commencement of the phase two of the project in 2011, only 28 per cent of expectant mothers accesses skilled care during delivery.
In his remarks, the traditional ruler of Kaltungo, Alhaji Sale Mohammed, said that because of the geographical topography of the state, many communities lacked access to quality health care service.

Jigawa
The Jigawa State Government said it recruited 1,564 teachers
for senior secondary schools across the State in the last six years.
The state Commissioner for Education, Prof. Haruna Wakili, who made this known in an interview in Dutse said the employment, which started in 2008, was done by the administration of Governor Sule Lamido to address shortage of qualified teachers in the state prior to his assumption of office in 2007.
The commissioner said the state government had been collaborating with the National Teachers’ Institute (NTI) for continuous training of teachers to improve their quality.
According to him, 440 classrooms in various senior secondary schools were renovated within six years to make the environment conducive for learning.

Kaduna
Governor Mukhtar Yero of Kaduna State has signed the
law banning the operation of commercial motorcycles in Kaduna metropolis and some other major towns in the state.
Briefing newsmen after the weekly Security Council Meeting, the state Commissioner for Information, Mr Ben Bako, said the ban was aimed at reinforcing security in the state.
Bako said that the ban followed the influx of commercial motorcycles in the state following a similar ban on their operations in some neighbouring states such as Plateau, Niger, Kano and the FCT.
The Commissioner listed the areas affected by the ban to include Kaduna North, Kaduna South, Chikun, Igabi, Zaria, Jema’a, Sabon Gari and Birnin Gwari local government areas.
Niger
The Association of Local Government of Nigeria (ALGON)
has reiterated its call for local government autonomy in order to ensure speedy development of the councils.
The ALGON National Deputy President, Mohammed Kantigi, made the call last Wednesday, in Minna when he appeared before the Niger House of Assembly for screening as a commissioner nominee.
He said, “I will articulate myself of what is expected of me. I will not allow people that brought us into power to cry. “I know that the governor is concerned with the welfare of his workers and surely he will not do anything contrary to that.
“He will bring in best hands to work with him in the State Executive Council because there are specific assignments he gives to people.
“We want to see if we can improve on what has been on ground. “I know the local government system very well and have been playing a role as the state financial secretary of ALGON,” he added.

Ogun
The Ogun Muslim Pilgrims Welfare Board last Tuesday
assured this year’s intending pilgrims from the state of a hitch-free exercise.
The Chairman of the board, Dr Isiaq Yusuf, gave the assurance in Abeokuta at the commencement of a three-day screening exercise organised for intending pilgrims.
According to him, it is expected of a Muslim to perform the pilgrimage once in a lifetime after fulfilling all rights expected of a practising faithful.
He said pilgrims for this year’s exercise would be screened to meet required standards, adding that a total of 1,212 slots were allocated to the state by the National Hajj Commission (NAHCON), Abuja.

Ondo
A Chief Magistrates’ Court in Akure last Thursday
sentenced three Benin citizens to three years in prison each for attempting to sell a 13-year-old boy. They are Kareem Saibu, 39, (father of the victim), Abdullateef Mumuni, 24 and Kadir Rasaq, 24.  The Chief Magistrate, Mr Adebanji Ayeomoni, sentenced each of them without an option of fine.
The accused, of no fixed address, were arraigned on a two-count charge of conspiracy and attempt to sell human being, and they all pleaded guilty to the offences.
Earlier, the prosecutor, ASP Zakari Ibrahim, told the court that the father of the victim and two others conspired to sell the minor for N8 million.
Ibrahim said the father brought the boy from Cotonou in Benin Republic to Nigeria to meet with the other accused persons, who live at Ibadan, to help him find buyers.
Plateau
Senator Gyang Pwajok, (PDP-Plateau), has condemned the
recent communal clash between the people of Irigwe and Rukuba in Bassa Local Government area of the state.
In a statement released in Jos by his Special Assistant on media, Chuwang Dung, the senator cautioned the communities to eschew violence.
Pwajok described “as sad and regrettable”  that the two tribes that had co-existed for decades needed to take arms against each other.
He said that the clash over land matters was uncalled for and urged for dialogue among the leaders of the communities toward resolving the issue through dialogue.
The Senator further advised the warring communities to shun other acts capable of breaching peace in the area.

Sokoto
The Sokoto State government last Tuesday donated four
Ford pick-up vans to the state command of the Nigeria Security and Civil Defence Corps.
The vehicles were handed over to the Commandant of the corps, Mr Yusha’u Yamel, by the Permanent Secretary, Careers and Special Services, Alhaji Tukur Mohammed.
Mohammed said the vehicles were donated to enhance the operations of the corps, and to encourage it to provide adequate security for lives and property in the state.
He appealed to officers and men of the corps to make good use of the vehicles, promising that the state government would continue to assist all security agencies in the state to function effectively.

Taraba
The Federal Government said that 400,000 farmers would
benefit from the subsidised fertilisers and seeds under its Growth Enhancement Scheme (GES) in Taraba.
The Minister of Agriculture and Rural Development, Dr Akinwunmi Adesina, who made this known at the commencement of the scheme in Jalingo said the Federal Government had subsidised the commodity by 25 per cent, while the state government further subsidised it by another 25 per cent.
Represented by the Regional Director, North-East, Alhaji Ibrahim Arabi, Adesina said each registered farmer would get two bags of fertilisers and a bag of seeds.
The Acting Governor of Taraba, Alhaji Garba Umar, said the initiative would boost agricultural productivity and enhance food security in the state.
Umar said the state government would procure more fertilisers for the farmers to ensure food security and urged farmers to make good use of the inputs to ensure bumper harvests.