Uyo, the Akwa Ibom State
capital has been ranked most notorious in vandalism of electricity facilities amongst areas covered by the Port Harcourt Electricity Distribution Company (PHED), a subsidiary of 4 power consortium Limited.
The Managing Director, of 4 Power Company, Engr. Mathew Edevbie, disclosed this last week in Port Harcourt when the Senate Committee on Privatisation and commercialization visited the Power firm at its Moscow Road Zonal Office in Port Harcourt.
Lamenting the high incidences of vandalism in Uyo, Edevbie said vandalisation of substations, stealing of cables, breaking of transformers, stealing of transformer oil as well as removal of gel from transformers in the area was frustrating the operations of the company.
“Running Uyo is four to five times the revenue we get there”, he said, remarking that his company which considered pulling out of Akwa Ibom State because of the problem, had taken its cry to the Governor of the State, Chief Godswill Akpabio, for intervention.
He regretted that the company inherited a network which is worse than envisaged at the period it acquired Power Holding Company of Nigeria (PHCN) facilities.
Enumerating other challenges, he mentioned inefficient metering and billing system resulting in high commercial losses, rampant electricity theft, massive debts owed by government agencies, wrong staff attitude, inadequate generation, high interest rate and lack of interest by funding institutions, amongst numerous others.
He, however, reiterate the company’s vision of becoming the most efficient and substainable utility firm in Nigeria as best provider of services, deliver returns to stakeholders and enahcne the vitality of the region but solicited for public support against activities of vandals.
He particularly urged members of the Senate Committee to initiate anti-power theft legislation that would strengthen power companies to penalize and prosecute vandals, law against aggressive behavior against utility personnel as well as the establishment of special court to handle electricity cases.
Responding, the Committee Chairman, Senator Gbenga Obadara, sympathized with power investors for allegedly buying PHCN infrastructure with monumental rot and blamed them for not acquainting themselves with the state of the infrastructure.
He advised PHEDC to take advantage of provisions of existing legislations to attend to the present challenges promising that his committee would study its findings and know how to assist them in the face of the challenges confronting the company.
The Committee chairman described the power sector as a lucrative one that has capacity to yield profit to the investors with time and urged members of the public to co-operate and be patient with the new investors as it would require some time for the nation to attend the desired target.
He commended the company for its determination towards better service delivery to the people.
Vice Chairman of the Committee and a one time managing director of Niger Delta Development Committee (NDDC), Senator Emmanuel Aguariavwodo advised management of the power firms to partner with the law enforcement agencies and also expand its commercial frontiers towards economic sustainability and viability.
The Committee Chairman said they were in the state as part of their tour round the country to ascertain the level of progress in the privatization process. 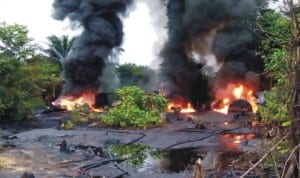 Illegal refineries being destroyed by Naval officers in Warri, recently.