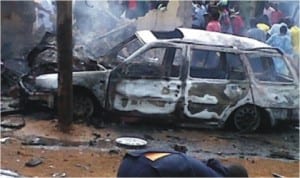 One of the burnt cars during yesterday’s Muslims, Christians clash in Kaduna State

Rivers State Governor, Rt. Hon. Rotimi Chibuike Amaechi says he remains fully committed to courageously defending and protecting the interest of Rivers people, come what may.
Governor Amaechi said this Saturday during the 4th Synod of the Church of Nigeria, Anglican Communion, Diocese of Okrika, held at St. James (Anglican Church), Ogoloma in Okrika Local Government Area of the state.
Represented by his Deputy, Engr. Tele Ikuru, the governor stated that he has always been truthful to the people of the state and proactive in identifying critical areas of interest to the welfare and wellbeing of Rivers people.
“While we were trying assiduously to tackle the menace of militancy in 2007, we were also concerned with taking the necessary step to make sure it does not resurface in the future. This explains why we paid serious attention to the education sector,” he said, adding that the administration has always been driven by the  ideology to quench an evil tendency in its toothing stage as it might be difficult to contain when it matures; hence it’s zero tolerance for cultism and other forms of violence.
The governor said there was need for the Anglican Church to review its method of administering the Holy Communion to its faithful from a single cup, in light of prevalent health issues in modern society.
Earlier, President of the Synod and Bishop of the Okrika Diocese of the Anglican Communion,  speaking on the theme of the synod, “The Joy of the Cross”, observed that joy is not the absence of sorrow or difficulties, neither is it the same thing as pleasure, instead it is the deep-seated peace given by God, in spite of prevailing circumstances.
He explained that the cross displays the fact that by the act of God, life can be introduced into the house of death, light can shine in darkness and hope can be seen in despair.
The session, which also featured the launch of the synod report, also had in attendance the Administrator of Greater Port Harcourt City Development Authority (GPHCDA), Dame Aleruchi Cookey-Gam, chairmen of Okrika and Ogu/Bolo local government areas, Barr. Tamuno Williams, and Hon. Maureen Tamuno, respectively, amongst other dignitaries.
The Rivers State Governor, Rt Hon Chibuike Amaechi has given a new revenue target to the state Internal Revenue Board (RSIRB) to hit and maintain N10billion monthly mark to cover recurrent expenditure and ongoing infrastructure development projects.
Speaking shortly after inaugurating new Chairman of the board of RSIR, Mrs. Onene Osila Obele-Oshoko on Friday in Government House, Port Harcourt, he assured her of government’s continuous incentives to ensure the board meets the new target.
He said, “If you don’t improve in the next two months, then something is wrong with the appointment. So, we believe that in the next two months, you people should work very hard, it does not require new things to improve, but to block the loopholes. If you reduce the number of touts that hang around you, you will see that you will improve.”
According to him, the new board is expected to rake-in between N9billion to N10billion monthly to cover the state’s recurrent expenditure, which has risen to N8.9billion monthly.
Besides that, he stated that the state government has numerous capital projects, including the new University of Science and Technology to be commenced next month, the ongoing Trans-Amadi Road expansion and the Dr Peter Odili/Woji/Akpajo Link Road, all of which require huge funding in order to be completed.
The governor explained that roads construction were not for political gains but to tackle the city’s growing traffic challenges, reasoning that more flyovers need to be built on the Trans Amadi Road and Dr Peter Odili Link Road to decongest Port Harcourt/Aba Road.
He added, “we are introducing two toll gates on the Dr Peter Odili Road. So, if you want to get out of Port Harcourt fast, then you have to pay us some money or alternatively follow Aba Road”.
The governor, however, congratulated the new revenue board chairperson for raising the state revenue profile, and assured her of more motivation as she improves on the current milestone.
On the other hand, Governor Amaechi has charged the State Judicial Service Commission to discharge their duties fairly without prejudice.
Shortly after swearing-in three members of the commission, he expressed the hope that the present crisis in the judiciary will be decided by the courts, and congratulated them on their appointment.
Members of the commission include, Tom Jackson Orage, Tonye Winston Lolomari, and High Chief Ambrose Nwuzi Igbokwe.

Confusion In Owerri Over Alleged Lion’s Escape From Zoo