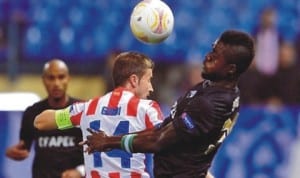 John Ogu (right) in club action. he has found playing time hard to come by at Academica.

Rivers State Federation Cup winners, Dolphins FC of Port Harcourt is eyeing to bring home the 2014 National Federation Cup title.
The four time winners on Sunday edged sister club, Sharks FC 8-7 on penalty shoot-out to emerge state champions, after both sides were tied on goals in regulations time.
Now, the club wants to have its hands on another national title after coming short in recent attempts.
According to the club’s technical Adviser, Stanley Eguma, the Sunday victory over Sharks was an indication that Dolphins are in track and in good stead to win the Federation Cup this season.
Speaking to newsmen after the success on Sunday, Eguma said that his team is motivated to winning something this year, and the cup is in focus.
He noted that the club boasts of matured players with vision and commitment to succeed.
Eguma went ahead to describe Dolphins as one of the best away teams in the land, despite the setbacks experienced in some home games.
“If you look at our record you will definitely confirm what I am saying, forget about our setbacks on home soil this season, we have done well, especially, at away games, and we have the quality to do well, particularly in the Federation Cup”, said Eguma.
Also speaking ahead of the weekend’s game against Kaduna United, Eguma said that football is not mathematics and that the fact that Sharks won away in Kaduna does not mean that victory is guaranteed for them.
He however, assured that Dolphins would do their best and try to win.
“We will do our best against Kaduna United, we have our plans for the match”, he said.
The Technical Adviser urged their fans and supporters to continue to have faith in the team, assuring that they would not be disappointed.