The Nigeria Football Federation (NFF) President, Alhaji Aminu Maigari, says they fear none of their Group F opponents at the World Cup in Brazil which kicks-off in June.
The Super Eagles are in Group F along with Argentina, Iran and Bosnia- Herzegovina.
In a chat with the  media in Abuja Miagari said that things were being well prepared for the Super Eagles’ assault for glory at the world showpiece and he believed that Nigeria need not fear any other team participating.
“We are almost ready (for the World Cup). At our level as a Federation, we have put everything in place. Very soon, we will have the three quality friendly matches to polish the boys ahead of the World Cup.
“I have no fear for the World Cup because we are going into a competition; so I see no reason why I should be afraid.
“I have confidence in the team, country, Nigerians and above all I have confidence in the players because they are committed and we are only looking forward to when we are going to Brazil,” Maigari told the media.
The NFF boss said further that there were no financial issues to worry about with regard to the upcoming World Cup.
“We (NFF) are not complaining (about money), and we in the NFF believe in the Federal Government and the NSC. What encourages me the more is the commitment of President Jonathan; so we are comfortable, finances will not be our problem,” he said.
After weeks of waiting, Super Eagles Head Coach, Stephen Keshi, and the Technical Committee of the Nigeria Football Federation (NFF), have reached a common ground and have named Nigeria’s provisional squad to the FIFA World Cup in Brazil in Abuja, yesterday.
Super Eagles coach, Stephen Keshi yesterday released a 30 man provisional list for the World Cup in Brazil, reports Completesportsnigeria.com
Keshi has included Stoke City striker, Osaze Peter Odemwingie in his provisional list. It can be recalled that the former West Brom forward ignited a long-standing row with the Eagles coach over his national team blackout for some time. But Osaze apologized to the Eagles coach in good time before the 2014 World Cup provisional list decision.
Skipper of the team, Joseph Yobo who lost his place in the centre back position at the 2013 Africa Cup of Nations was also named in the side.
Remarkably, Keshi left out Villarreal of Spain striker, Ike Uche. The Eagles boss also had a row with the player. And with Uche refraining from making an apology like Osaze Odemwingie did, Keshi has axed him from his World Cup squad.
The final squad for the World Cup will be released on June 2.
Eagles 30 Man Provisional List:
GOALKEEPERS: Vincent Enyeama, Austin Ejide, Chigozie Agbim, Daniel Akpeyi
DEFENDERS: Elderson Echiejile, Juwon Oshaniwa, Godfrey Oboabona, Azubuike Egwuekwe, Kenneth Omeruo, Joseph Yobo, Kunle Odunlami, Efe Ambrose
MIDFIELDERS: John Mikel Obi, Ogenyi Onazi, Ramon Azeez, Joel Obi, Nosa Igiebor, Michael Uchebo, Ejike Uzoenyi, Sunday Mba, Reuben Gabriel
FORWARDS: Ahmed Musa, Shola Ameobi, Emmanuel Emenike, Obinna Nsofor, Osaze Odemwingie, Babatunde Michael, Victor Moses, Uche Nwofor, Nnamdi Oduamadi 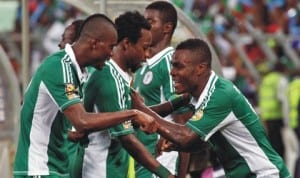