Benue
The Maize Farmers Association of Nigeria, Benue chap
ter, has urged the federal and state governments to resettle displaced farmers to enable them to return to their farms.
In a statement signed by the association’s Chairman, Mr Sam Kwa’na, in Makurdi, recently, the association also urged the government to help the affected farmers with agricultural inputs.
It also appealed to the government to ensure security in the hinterlands for farmers to concentrate on their farms without fear of attacks.
The association, however, rejected the idea of creating grazing reserves for herdsmen in Benue, stressing that maize and cattle cannot live side-by-side.

Kaduna
Deputy Inspector-General of Police, Emmanuel Kachi-
Udeoji, has urged Nigerians to fear God and embrace peace for sustainable development in the country.
He made the call in an interview with newsmen shortly after a town hall meeting with traditional, community and religious leaders as well as trade unions in Zaria, Kaduna State.
Kachi-Udeoji, who is in-charge of Logistics and Supply, Force Headquarters, Abuja, recently reminded the people that they would acount for their deeds on earth before God.
In his contribution, a traditional title holder in Birnin-Gwari Emirate Council, Alhaji Abdullahi Mohammed, called for the establishment of more police divisions in Birnin-Gwari local government Area to curb crime.
He also appealed for understanding and mutual respect between the traditional institution and police to enhance information flow.

Katsina
The Katsina State Government says it has spent N116
million on the rehabilitation of dams and irrigation schemes in six local government areas of the state.
Governor Ibrahim Shema announced this last Tuesday in Daura local government at the launch of the 2014 vegetables and fruits show and sale of animal feeds.
Shema, who was represented by the Head of Service, Alhaji Lawal Aliyu, said the rehabilitation was to enhance irrigation activities in the state.
The governor, who listed the benefiting local governments as Dutsin-ma, Faskari, Jibia, Kusada, Malumfashi and Matazu said that the government had drilled 554 tube wells across the state to boost agricultural productivity through irrigation farming.

The National Human Right Commission (NHRC) has said
it  facilitated the speedy trial of 179 awaiting trial inmates in Kebbi State.
The Executive Secretary of the commission, Prof. Ben Angwe, said this in Birnin Kebbi, last Tuesday, during a visit to prisons formations in the state as part of the 2014 annual prison audit.
He said the commission would intensify efforts to ensure that inmates awaiting trial secured prosecution or release promptly to ensure speedy dispensation of justice.
In his remarks, the Chairman of the Senate Committee on Human Right, Justice and Judiciary, Senate Umar Tambuwal, said his committee was determined to protect the human rights of citizens.

A Special Adviser to Governor Babatunde Fashola of
Lagos State, Mr Muslim Folami, says the Political and Legislative Powers Bureau of the state government has helped to promote good governance.
Folami, Special Adviser on Political and Legislative Matters, who spoke in Ikeja during the Ministerial Press Briefing in commemoration of Fashola’s seventh year in office said that the Bureau was set up to promote a harmonious relationship between the executive and legislative arms of government and it had done so creditably.
He said through the Bureau, the Governor assented to 25 of the bills passed by the state legislature in the last one year.
Folami said that the bureau had been facilitating the hosting of breakfast meetings between the Governor and the legislature to promote good governance.
Nassarawa
A Senior Magistrates’ Court in Mararaba, Nassarawa
State, has sentenced four motorcyclists to three months in prison each for violating traffic regulations.
Those sentenced are Abiodun Femi, 28; Dauda Muhammad, 32; Ali Ibrahim, 22 and Ibrahim Abdullahi, 29.
The Senior Magistrate, Mr Iliya Aku, sentenced them after they pleaded guilty to the charges of riding without licence and causing obstruction.
Aku gave them an option of N3,000 fine each and also ordered the police to return the motorcycles to the convicts after they have paid the fine.
Earlier, the prosecutor, PC Jacob John, told the court that the convicts were arrested under the Mararaba bridge for failing to display their registration numbers and riding without side mirrors on April 28.
John said that they also rode the motorcycles without licence and caused obstruction on highway.
He said the offence contravened the Road Traffic Act 2010.

Oyo
The Oyo State Commissioner of Police, Mr Mohammed
Indabawa, has attributed the success of crime fighting in the state to the timely information being provided by the public.
Indabawa who gave the commendation on Wednesday in Ibadan while parading 14 robbery suspects arrested at different locations in the state said that the command was grateful to those who gave adequate information which had assisted the police in discharging their duties.
“On April 27, at about 11.00 p.m. we received a distress call from the Kwara State Police Command that a gang of armed robbers was heading towards Oyo State from Ilorin. An ambush was laid by the police along the Oyo-Ogbomoso expressway which led to an exchange of gunshots and subsequently, the mastermind of the robbery operation was arrested,” he said.
The robbery mastermind, however, told newsmen that he chose to rob her sister because she failed to buy him a motorcycle for his transport business.

Ogun
The Ogun State Government has inaugurated the Com
munity-Based Health Insurance Scheme (CBHIS) aimed at addressing the financial challenges of accessing health care by vulnerable groups.
Speaking at the inauguration in Abeokuta, last Tuesday Governor Ibikunle Amosun of Ogun State said that the project was geared toward ensuring that the people enjoyed affordable, sustainable and efficient healthcare.
According to the governor, the insurance scheme is designed to provide financial protection against the causes of illness and improve access to quality health service for those excluded from the formal insurance.
Explaining the scheme, the Commissioner for Health, Dr Olaokun Soyinka, said treatment would be provided upon presentation of identity cards by the contributor.
He said that the premium was N7,000 annually with N3,000 as government contribution and N4,000 as enrollee contribution.
Plateau
The Commissioner of Police in Plateau State, Mr Chris
Olakpe, has advised parents and guardians to adopt strategies to protect their daughters against rape.
Olakpe said  in Jos on Wednesday that the number of rape cases in the state was rising and parents needed to take proactive measures to safeguard their daughters.
The commissioner called on religious and opinion leaders to help in the efforts by preaching against the increasing incidents of rape in the society.
He appealed to the state House of Assembly to enact a law that would provide severe punishment for rapists and also appealed to members of the public to always pass vital information about the activities of rapists to the police.
Sokoto

The Sokoto State Government said last Tuesday that it
spent about N800 million to construct the Murtala Mohammed Specialist Hospital, Sokoto.
The state Commissioner for Information, Malam Danladi Bako, said in Sokoto  last Tuesday that the project would give necessary fillip to health care delivery system.
He said government had provided the basic medical facilities needed to ensure qualitative health care services in a functional teaching hospital.
He explained that the facility would be upgraded to a teaching hospital for the state university.
Bako said government had taken necessary measures to provide the required manpower that would effectively manage the hospital.

Taraba
The Jukun, Tiv and Fulani communities in Wukari local
government area of Taraba State in Wukari on Wednesday signed a peace agreement to end ongoing clashes in the area.
The agreement was signed at a meeting presided over by the state acting Governor, Alhaji Garba Umar, and the Paramount Ruler of Wukari and Chairman, Taraba Traditional Council, Dr Shekarau Angyu.
Umar said at the occasion that the government would pay compensation for property destroyed and also continue to provide relief materials for the internally displaced persons.
“We thank God that the major tribes involved in the crisis have decided to give peace a chance by calling us to witness the signing. “The state government will help in looking for the cows and other items that were missing during the crisis so that peace will permanently return among the tribes in Wukari and other parts of the state,” he said.
Those who signed the agreement on behalf of their people include: state Chairman, Jukun Cultural Association, Mr Zando Hoku, state Chairman Tiv Cultural and Development Association, Mr James Nungwa, and  state Chairman Miyetti Allah Cattle Breeders Association, Alhaji Mafindi Danburam,. 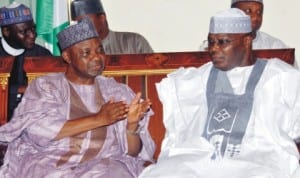