There was jubilation at the
Palace of the Eze Apara Rebisi in Port Harcourt City Local Government Area, last weekend as the people of Rebisi Kingdom gathered to register their solidarity with the new occupant of the Rebisi stool, HRM Eze Victor Nnanna Woluchem II, Eze Apara Rebisi XII.
Youths, elders and women thronged the palace of the new monarch singing and carrying placards, with inscriptions “Amaechi thank you for your quick intervention,” “may the new king of Rebisi live long”, Amaechi the eye of Democracy”. “Amaechi we are solidly behind you” among others.
The President General of the Rebisi youths Assembly, Comrade Eyinda Chike, who led the youths on the solidarity visit, declared their unalloyed support for the new Rebisi King
Comrade Eyinda described HRM Victor Nnanna Woluchem as a man of peace who is accessible by all.
The youth leader thanked Governor Chibuike Amaechi for recognizing the new monarch and ending the tortuous journey towards the replacement of the late Rebisi Monarch, HRM Eze Sunday Woluchem.
In his remark, the President-General of Ikwerre Youth Congress, Comrade Chinedu Samuel, described the emergence of HRM Victor Nnanna Woluchem as a good development for the Rebisi Kingdom, and stated that his reign would foster even development in the area.
Also speaking, a stakeholder in Rebisi kingdom, Dr Kingsley Kalagbor Gbekee, thanked Governor Amaechi for his considerable wisdom to recognize the new Rebisi Monarch.
Dr Ebekee who spoke on behalf of the Rebisi Consultative Forum, said the people of Rebisi would rally round the new monarch to make him succeed in his royal duties.
In his response, the new Rebisi Monarch expressed thanks to God over his coronation and recognition by the Rivers State Government.
He said tradition was followed strictly in the process of his selection as a Royal Father, and called on the youths to defend their tradition at all time for posterity.
While thanking the Rivers State Government for his recognition, he assured to run an open-door policy and bring rapid development to the area during his reign. 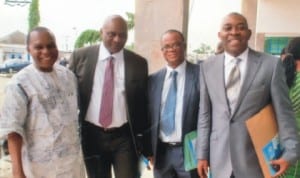 Special Adviser to the Rivers State Governor on Strategy and Planning, Okey Okirie (right) Permanent Secretary, Ministry of Budget/Economic Planning, Promise Njiowhor (3rd left) and others at a public function.