Some football stakeholders, have
described the recent claim by a convicted Singaporean match-fixer that he assisted the country to qualify for the 2010 FIFA World Cup as disturbing.
Wilson Raj Pemural, a self-confessed match-fixer declared in a recent book publication that he “helped’’ the Super Eagles to get to South Africa.
Some of the stakeholders who spoke to newsmen called for a thorough investigation to unravel the truth of the matter.
A former Nigeria Football Association (NFA) Chairman, Ibrahim Galadima, urged the NFA to investigate the alleged match-fixing scandal.
Galadima said that such an investigation would help to ascertain the veracity of Pemural’s allegations.
“It’s a disturbing development at a time when the Super Eagles are doing well in the international scene.
“Although one can’t dismiss it, it is now a global issue and the people at the helm of affairs must find out the possibility, a thorough investigation must be carried out,’’ he said.
Also, a former Super Eagles coach, Adegboye Onigbinde, told newsmen that it would be sad if the allegations were found to be true.
Onigbinde added that the issue should be look into urgently by the appropriate bodies, noting that such a delicate matter could affect the team’s preparation for the upcoming World Cup in Brazil.
“If the allegations are true then it is an unfortunate news that Nigeria as a country is involved in this.
“We don’t need a thing like this at a period we are preparing for the World Cup, a mere speculation can distract the Super Eagles,’’ he said.
Mutiu Adepoju, an ex-international, in his reaction said that match-fixing was a serious offence that should be frowned at.
Adepoju added that an investigative panel should be set up to get to the root of the matter and punish whoever is found guilty.
Meanwhile, the NFA has categorically dismissed Perumal’s claims that he assisted the country to qualify for the 2010 World Cup in South Africa.
In a statement in Abuja, the NFA declared that the entire claim by Perumal was nothing more than A ‘distinct fiction’
The statement insisted that the true heroes of Nigeria’s qualification for the World Cup finals were the Federal Government, the NFF, the players and the team’s coaches.
“We have gone through the fictitious write-up by the Singaporean, who was fittingly convicted for his nefarious activities and has spent time in jail.
“The NFA will only say at this moment that there was no truth to the claim and that we had nothing to do with Perumal all through the Super Eagles’ qualifying series for 2010 World Cup,’’ it said.
The statement also quoted the NFA General Secretary, Musa Amadu as saying: “If the book impugns on the image of NFA, our players and our dear country, we will take appropriate action’’.
Amadu said that further enquiries should be directed to the world football governing body, FIFA, since the match was a FIFA competition.
NFA’s Integrity Officer, Mohammed Sanusi, stated that alongside the NFA Match-fixing Investigative Officer, Christian Emeruwa, he is in communication with FIFA Security on match-fixing matters and will dig deeper into the claim.
Nigeria overhauled Tunisia, Kenya and Mozambique in the final rounds of the qualification series to reach the first FIFA World Cup finals to be staged on African soil in 2010. 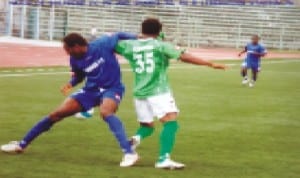