Pro bono publico, which means for the public good, is a Latin phrase for professional work undertaken voluntarily and without payment or at a reduced fee as a public service.
It is common in the legal profession where access to justice for those who need to approach the court is considered not to be a privilege but a right.
According to Wikipedia, lawyers in the U.S. are recommended under American Bar Association’s ethical rules to contribute at least 50 hours of pro bono service per year.
It also quantifies the minimal financial contributions that lawyers should aspire to make to organisations providing legal services to underprivileged persons.
Since 2002, many UK law firms and law schools have celebrated an annual pro pono week, which encourages lawyers to offer pro bono services, while increasing public awareness on pro bono culture.
However, in Nigeria, access to justice, especially for the poor, still remains a mirage due to the absence of an established pro bono culture; although the Federal Government established the Legal Aid Council, which is performing similar functions.
Also, the Lagos State Government created institutions such as the Office of the Public Defender, Peoples Advice Centre, Directorate of Citizens Rights and Citizens’ Mediation Centre to perform such functions.
Observers, however, note that in spite of these efforts, the indications are that only a small fraction of the legal problems experienced by indigent persons are addressed via such mechanisms.
They note that although the Nigerian Bar Association (NBA) encourages its members to provide free legal services to indigent persons, such services have failed to address most of the challenges.
They also note that there has been no conscious effort by the NBA to re-orientate lawyers that they have a professional obligation to provide free legal services to underprivileged persons.
The concerned observers note that apart from the usual law clinics offered by various NBA branches during their annual week programmes, only a few law firms have designated desks to handle pro bono cases.
Worried by this development, the Lagos State Government inaugurated the Lagos State Public Interest Law Partnership (LPILP) in 2012.
The LPILP is a platform where the state government partners with private firms to provide free legal services to indigent citizens of the state.
However, a recent survey carried out by the Global Network for Public Interest Law in partnership with the Lagos State Ministry of Justice, shows that 44.7 per cent of law firms in the state have no formal structures in place for pro bono services.
Therefore, Gov. Babatunde Fashola of Lagos State, at a dinner to honour some lawyers for their outstanding contributions to the pro bono culture recently in Lagos, reiterated the need for increased public awareness to ensure equal access to justice.
“The rights stipulated under the Nigerian Constitution and the rule of law will mean nothing, if people are denied quality legal representation,’’ he said.
Fashola said that the idea of protecting the citizens’ rights in civil and criminal cases would be ineffective if those rights could not be fully ventilated in a most qualitative and quantitative manner probably because of the absence of a lawyer.
The governor said that 64 law firms and four non-governmental organisations had already signed up to be part of the LPILP, making it the “largest law firm in Nigeria.’’
Mr Ade Ipaye, Lagos State’s Attorney-General, who spoke at a recent a pro bono stakeholders’ meeting in Lagos, said that the state was set to establish a special fund to assist young lawyers to give free legal services to the poor.
“We intend to launch a fund for independent young lawyers to assist them in handling their pro bono cases.
“Funds from the fund can be used for payment of their filing charges and transportation costs so as to fast-track the justice system,’’ he said.
Ipaye suggested the inclusion of pro bono as a course in the curriculum of the Nigerian Law School, saying that it would also aid efforts to encourage aspiring lawyers to buy into the idea.
Presenting a report on the pro bono culture in Lagos at the stakeholders’ meeting, Prof. Lanre Fagbohun said that there were enormous challenges facing efforts to provide equal access to justice for citizens.
Fagbohun of the Nigerian Institute of Advanced Legal Studies observed that majority of litigants still appeared in court without attorneys for economic reasons.
Nevertheless, Mrs Omotola Rotimi, the Director, Office of the Public Defender, urged more lawyers to buy into the ideals of the LPILP.
She said that the stakeholders’ meeting was an opportunity for the public and private sectors to brainstorm and collaborate as equal partners in efforts to advance the course of unhindered access to justice.
“Our aim is to develop a framework for public-private partnership dedicated to ensuring that no resident of Lagos State is prevented from accessing the justice system on the grounds of lack of means,’’ she said.
Rotimi’s sentiments notwithstanding, Mr Tolu Ogundare, a lawyer, argued that young lawyers were not too keen on rendering free legal services because of the current economic situation of the country.
“Our parents paid a lot to see us through university and law school and once we start practising, the first thing on our mind is to repay this debt,’’ he said.
Besides, Miss Folashade Adebayo, another lawyer, said that the present remuneration of lawyers in the public service was very poor, adding that they had to embark on private practice to enable them to meet some of their basic needs.
“So, there is actually no time for us to start thinking of pro bono because the little time we have, we use it to make some money to cater for ourselves,’’ she added.
Irrespective of these challenges, observers believe that if more states can emulate Lagos State by promoting pro bono culture, the culture will become entrenched, while providing a veritable and potent channel for justice administration in the country.
Asowata writes for the News Agency of Nigeria (NAN). 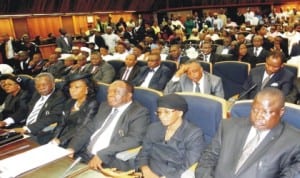 Some judges of the Court of Appeal at their swearing-in in Abuja, recently.

The suspect is standing trial on a one-count charge bordering on sexual abuse and forcefully having carnal knowledge of a 16-year old girl.

The charge sheet read, “that you, Mgbechi Wekwa ‘M’ on 13th day of January, 2021, at Rumuakwunde in Emohua local Government Area, but triable in Port Harcourt Magisterial District did unlawfully and sexually abuse one Victoria Edwin ‘F’, 16 years old by inserting your penis into her vagina, and thereby committed an offence punishable under Section 32(1)(2) of the Child’s Rights Act Cap. 50 Laws of the Federation of Nigeria 2013.

The presiding senior magistrate, after hearing application for bail brought by the defence Counsel, Martina Okpeeholo, adjourned the matter for bail consideration to Monday, February 22, 2021, and ordered that the suspect be remanded at the Port Harcourt Correctional Centre.

Speaking outside the court room, practicing lawyer in Port Harcourt, Jane O. A. James, holding watching brief for the complainant on behalf of the Centre for Basic Rights Protection and Accountability Campaign, expressed displeasure that the police watered down the charge to Section 32(1)(2) of Child’s Rights Act 2013, which is a charge of sexual abuse and exploitation instead of Section 31(1)(2), which states the definition and punishment for rape as is the case in this instant matter.

The Central Bank of Nigeria (CBN) has provided credit facilities to more than 200,000 maize farmers to bolster domestic maize production and reduce the  price of maize through increased production.
National President, Maize Association of Nigeria (MAAN), Alhaji Bello Abubakar on Monday confirmed that the CBN had released credit facilities to more than 200,000 farmers who were expected to produce more than 25 million metric tonnes of maize in the 2020-2021 planting season.
The funds were provided under the Anchor Borrowers Programme (ABP) of the CBN.
Abubakar said the credit facilities were being distributed to members along the maize value chain nationwide.
He expressed confidence that the support of the CBN would boost production and, ultimately, ensure availability as well as stability in the price of the commodity.
According to him, despite  the cases of insecurity in some parts of the country, farmers are committed to meeting the objective of food security.
Abubakar charged middlemen “not to take advantage of the supply gap to hike the price of the grains”.
He assured the government, that “farmers would maintain reasonable price” and urged the Federal Government to put in place “mechanism to protect farmers from market triggered shocks”.
Meanwhile, the price of maize is set to crash to N120,000 per metric tonne next month from N155,000 per metric tonne.
The maize price slash will be brought on by the planned release of about 300,000 Mt into the market from strategic anchors under the ABP of the CBN.
With the release of 300,000 Mt, it is expected that the prices of maize in the market will drop significantly, thereby increasing demand for the crop and, ultimately, enhancing the gains of maize farmers.
The anticipated maize release follows moves made by the CBN, working with the Nigeria Customs Service (NCS), in the last quarter of 2020, to facilitate import waivers to four agro-processing firms to import 262,000 tonnes of maize to bridge the shortfall in production and augment local production.
A prime anchor under the maize production, Dr. Edwin Uche, yesterday said the planned dry season farming, timely distribution of input to farmers and improved security, would enhance production and ensure stability in the price of maize.
che noted that banditry, drought in some parts of the country in 2020 and middlemen were responsible for  high price.
Abubakar also attributed the shortfall in the quantity of maize available in the market to insecurity around the major maize producing belt of Niger, Kaduna, Katsina, Zamfara and part of Kano states.
According to him, hoarders and middlemen are responsible for the scarcity and exorbitant price of maize.
Another major stakeholder in the maize production, Mr. Ayodeji Balogun of AFEX, attributed the hike in price to cash-flow problem of farmers which has compelled them to resort to collecting cash from buyers ahead of production and resort to side-selling, especially across the borders of neighbouring countries due to higher prices.