The Accountant General
of Rivers State, Sir Ngozi Y. Abu, says the Rivers State Government has not abandoned the Chuowo Ihuama Road project in the Ahoada East Local Government Area.
Sir Abu who said this in his country home Ihuama in an interview with newsmen shortly after the dedication of St Luke’s Anglican Church building at Ihuama said that the heap of sand was an indication that the project was on course.
The Accountant General said that the church which was the third built by the community was revealed by God in the year 2000 during a prayer vigil at St Paul’s Anglican Church Diobu.
He said that the building was designed to last over one hundred years, stressing that the church would work out modalities for a special fund that will be collected every Sunday during offering time for its maintenance.
Abu commended the dignitaries that turned out for the dedication, stressing that it was an indication that people are appreciating the work of God in the area.
In his sermon, the Archbishop of Province of the Niger Delta, Rt Rev Ignatius Kattey urged humanity to be grateful to God as the maker of all things, stating that those who delight in doing evil should remember that whatsoever a man sows, that he will also reap.
He urged the people to emulate the qualities of Sir Ngozi Abu who is doing everything to promote the work of God within and outside his community.
The Bishop also warned the Christian Community against combining idol worship with the things of God noting that such act will not pay them any good.
Speaking with newsmen, the State Commissioner for Government Affairs, Sir Samuel Eyiba said that the church will enhance the growth of Christianity both in the community and the rest of Ekpeye land.
He said that government is happy with the role the churches are playing in propagating peace in the State. 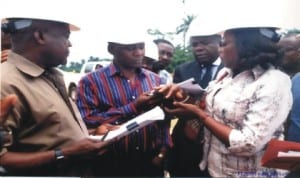