Contrary to rumour making
round the mill, wife of the Rivers State Governor, Dame Judith Amaechi for the first time has cleared the air, dismissing the rumour purporting that she once served as house maid during her formative years.
Mrs Amaechi made the clarification recently during the “celebrity read a book session” with selected schools at the 2014 UNESCO Port Harcourt Literary and Book Festival.
The first lady’s clarification was in response to a question posed by one of the students who wanted to know if she was once a house maid in the past before her present status.
She stated that such rumour was very laughable and figment of the peddlers’ imaginations.
In her words: “There is nothing wrong in being a house maid, it is a process and path to success, but I want to state emphatically and unequivocally that I was never and had never served as house maid to any one, it is unfair, this is falsehood and our children must be insulated from lies and propaganda, let’s learn to train them on the path of truth, integrity and righteousness”.
Governor Amaechi’s wife who went down memory lane said that though she lost her mother at the age of four, God was able to open other windows of opportunities for her.
“My mother died when I was four, my aunty, Mrs Ndukue, an educationist who is my mother’s sister took over my responsibilities.  We first lived in the north before coming back to Port Harcourt where she worked at the Ministry of Education.
“I had the privilege of attending Highbrow Primary School, that is the Port Harcourt Primary School. I made one of the best results, sat for entrance examination into the Unity School, and I was admitted into the Federal Government Girls College, Abuloma. These  are schools reserved for children of the influential and top echelon in our society.  Will any house maid be admitted into such schools? This is just an attempt to smear my reputation. Subsequently, I was admitted into the Rivers State University of Science and Technology, (RSUST) where I studied Urban and Regional Planning”, she said.
The Rivers first lady was appreciative to God that despite the demise of her mother, she was still a success.  “God used my aunty and her husband to touch and impact my life positively in their areas of influence.  My mother was from Ndoni in Rivers State, so it is very easy to investigate my background”.
She further added that God had been gracious to her and blessed her tremendously with a loving husband and wonderful children. 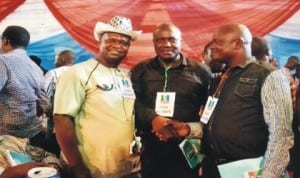