A Magistrates’ Court in Makurdi, has ordered two
brothers, Mzuaii Uaaku and Terzungwe Uaaku, to be remanded at the Federal Prisons, Makurdi, for alleged conspiracy and armed robbery.
Mzuaii, 35, and Terzungwe, 25, both farmers, hail from Mondo village in Logo Local Government Area of Benue.
The police prosecutor, Cpl. Adama Owoicho, told the court that Oragbai Terna of R.C.M Primary School, Oragbai, reported the case at the Oragbai police station on March 28.
He said that the complainant was at home when his son, Terso Terna, reported to him that he had been attacked.

The Transmission Company of Nigeria (TCN) says
it has commenced the construction of a transmission bye-pass to temporarily replace the destroyed 132kV transmission line from Tegina to Kotangora, Niger State.
Mr Dave Ifabiyi, TCN Assistant General Manager (Public Affairs), disclosed this in a statement in Abuja recently.
The statement said the company had mobilised to the site to construct the transmission line which was destroyed by rain on April 18.
It said that four transmission towers were destroyed as a result of the incident at Corner Mariga after Tegina, Niger state, causing power outage in the area.

The Nigeria Association of Women Journalists
(NAWOJ) has commended Hajiya Adama Dankwambo, wife of Gombe State governor, for empowering more than 7,000 women in the state.
Mrs Ruth Absolon, the Chairperson of the association in the state, made the commendation in an interview with newsmen in Gombe.
She said that the beneficiaries were empowered in the last three years.
“The wife of the governor had empowered more than 7,000 women across the state.
“Honestly, she (Dankwambo) has empowered women, particularly the rural dwellers and less privileged, who were hopeless.”

Poultry farmers in Hadejia, Jigawa State, have la
mented the high prices of chicken feeds in the area.
They also called on the state government to establish a feeds mill to encourage processing and poultry production in the state.
A cross section of the farmers who spoke to our correspondent  in Hadejia, said that the measure was necessary to end scarcity and enhance access to the products.
Mrs Halima Ismail, a poultry farmer, said that high cost of feeds was making poultry farming expensive and less attractive.

The Kebbi State  Government has commenced the
training of 150 Sharia Courts Judges on advanced Sharia Legal System to enhance dispensation of Islamic Justice in the state.
Addressing the participants in Birnin Kebbi, the Chief Registrar, Sharia Court of Appeal, Alhaji Muhammad Sani, said the training would improve Judges’ practical knowledge and enhance their understanding and memory on Sharia legal system.
.
Kaduna
Kaduna State Government  said it had paid more     than N100 million to the National Examination Council (NECO) as examination fee for its 15,000 candidates.
The Commissioner for Education, Alhaji Ibrahim Ali, disclosed this in a statement issued in Kaduna, and made available to newsmen.
Ali said the settlement of the fee would alleviate the financial  burden on parents and guardians of the students, encourage access to education and improve the status of education in the state.
He however said only students that obtained at least five credits, including mathematics and English language, would benefit from the programme.

The Commissioner for Agriculture and Co-opera
tives in Lagos State, Mr Gbolahan Lawal,  has urged Nigerians to exploit the benefits of coconut.
Lawal gave the advice at Badagry during the grand finale of the annual coconut festival, saying that its benefits were under-exploited in the country.
“Coconut is often referred to as the tree of life and a wonder crop because of its versatility as all the parts can be put to economic and social use.
“Every part of the tree including the stem, branch, fruits has significant use; it has economic, environmental, medicinal and ornamental benefits which has been grossly unexploited in Lagos and Nigeria as a whole”, he said.
Ogun

The police have arraigned two women, Remi
Odeyemi, 27, and Aishat Showunmi, 19, in a Magistrates’ Court in Ota, Ogun, for slapping a policeman.
The accused were arraigned on a two-count charge of assault and conspiracy.
The prosecutor, Cpl. Olumide Awoleke, told the court that on April 7 at about 8.00 p.m. at Igbusi village, Ifo in Ota, the accused persons slapped Cpl. Yemi Odeniyi while on duty.
He said that the assault on Odeniyi was unprovoked, adding that the offence contravened the provisions of Sections 356(i) and 516 of the Criminal Code Revised Law of Ogun, 2006.

Osun
Dr Muritala Afolabi of Ladoke Akintola Teaching
Hospital (LAUTECH), Osogbo, has advised that malaria should be properly diagnosed before treatment.
Afolabi gave the advice in an interview with newsme in Osogbo.
The medical practitioner said “it is wrong to embark on malaria treatment without proper diagnosis.OyoOyo
Oyo

A professor of Chemical Pathology, Ladoke
Akintola University of Technology, Ogbomoso, Oyo State, Prof. Taiwo Adewole, has called for a national policy on DNA-based medical diagnosis of diseases in Nigeria.
Adewole made the call in his inaugural lecture in Oshogbo recently.
“DNA in the medical terms is a popular acronym for Deoxyribonucleic Acid, a double-stranded filamentous structure (molecule) found in the nucleus of every cell of higher organisms, including man.
“Every disease is about DNA while DNA is the key to the diagnosis, prognosis (disease outcome) and treatment of diseases, like cancer and malaria,” he said.

A delegate to the ongoing national conference,
Prof. Sambo Wali, says the conference is not only desirable, but timely.
“The conference is a welcome development to all well meaning and patriotic Nigerians who have the interest of the nation at heart,” he said.
Wali, who addressed a news conference in Sokoto, also said that it would allow Nigerians to express themselves freely.
“The conference is a forum to discuss the diverse views and feelings of the citizens about the country which has existed for over a century as a single indivisible entity.

A chieftain of All Progressives Congress (APC)
in Yobe State, Alhaji Sani Fema, says  the party’s consensual procedure in the ward and local government congresses had produced most popular and acceptable officials.
Fema said this in an interview with newsmen in Damaturu recently .
He said efforts were in place to produce the state executive council of the party by consensus.
“We are all putting heads together under the leadership of the state governor, Alhaji Ibrahim Gaidam, to produce, through collective agreement, officials that will lead the party at the state level”, he said. 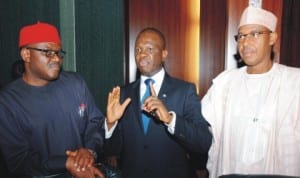