President Goodluck Jonathan has officially received the former governor of Kano State, Ibrahim Shekerau alongside people who joined the Peoples Democratic Party (PDP) in the state.
He also accused the Kano State Governor, Rabiu Kwankwaso of deliberately denying Kano delegates their mobilization fund and refreshments given by his campaign headquarters in 2011.
At the ceremony organized by the PDP yesterday, to receive new members that defected from other political parties, President Jonathan promised to work hand in hand with the former governor in bringing Kano back to his party.
Governor Rabiu Kwankwaso of Kano State had said that the Federal Government under President Goodluck Jonathan has failed Nigerians by not doing what is expected of a responsible government to better their lives, adding that Jonathan is not the President Nigerians deserve.
He said that President Goodluck Jonathan is insensitive to the yearnings of Nigerians, lamenting that at a time when the nation should be mourning the Nyanya bomb explosion that left 72 dead and 133 injured, the President decided to embark on what he described as “merry making trips”.
“At a time when several innocent lives have been lost, when many of the victims are in hospital seeking blood donations to survive, the President is gallivanting round the country in the name of PDP Unity Rally”, the governor contended.
The governor, who spoke in Hausa during the 2nd matriculation ceremony of students of North West University, Kano, at the Government House lawn yesterday wondered why the President should be travelling aimlessly with tax payers’ money, while the common man is being killed daily because of failure of the Federal Government to adequately protect lives and property.
Kwankwaso chided the President for justifying, promoting and sustaining corruption, pointing out that despite the allegation of corruption against the Minister of Aviation and the missing $20 billion oil funds, for instance, the President remained silent on such issues during his illegal campaign visit to Kano.
“The man came to Kano to smear our image, but thank God, the man gave me free publicity by mentioning my name over 50 times in a 15 minute address”, the governor stated.
“The President, his Vice, Namadi Sambo, and the Secretary to the Government of the Federal Sen. Anyim Pius Anyim, are vultures. They want the PDP to die and feed on its carcass”, said the governor, asserting that personally, their present disposition is fertilizer to his future political aspiration.
“Supposing I decide to contest for the number one seat in this country, I will beg APC, APGA and Labour Party not to cast their votes for me – I want to assure you that with the PDP vote I will garner, definitely, I will defeat the incumbent President hands down”, the governor maintained. 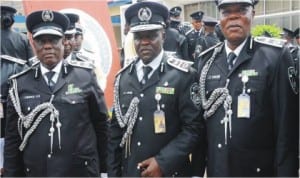 Bomb Scare In PH, NASS …As People Scamper For Safety