African Finance Ministers and Central Bank Governors met on Wednesday to discuss policies required to stop the excessive illegal flow of capital from Africa to tax havens around the world.

According to the experts it stage-managed financial returns by multinational oil firms and funds spent on foreign universities and healthcare.

Prof. Leonce Ndikumana of the University of Massachusetts in the U.S., said the beneficiaries of Africa’s massive capital flight were mostly tax havens and regulators of the global financial system.

“In real terms, 39 African countries lost 1.3 trillion dollars but, together with interest earned over this period, the combined loss comes to 1.7 trillion dollars,” Prof. Ndikumana told The Tide source.

He said the huge amount of money lost by African countries through the illicit transactions had severe economic effects on the continent.

“These amounts reduce private investment, loss of tax revenue to finance public investment and they undermine governance by sending a negative message to the citizens,” the economics professor said.

Nairobi-based think-tank, the African Economic Research Consortium, convened the meeting to give the top finance sector policymakers an overview of the state of capital flight and explore ways to stop it.

“We have no time to lose. A sense of urgency is needed so as to make sure this time around; Africa is not waiting for better times.

“We have to build the better times now,” Carlos Lopes, Executive Secretary of the UN Economic Commission for Africa, said in opening remarks.

Lopes said measures, including coordination across boundaries within Africa and worldwide, were required to stop the outflow of cash from Africa.

He pointed out that most of the funds escaped through transactions conducted by a third country under the cover of financial secrecy before landing into a tax haven, beyond the reach of local financial regulators.

“Individual responses to capital flight is not adequate, not even the most developed countries with full fledge security systems,” the UN official said. 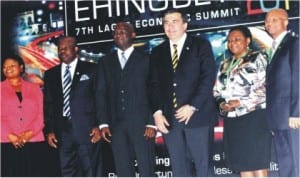 5G Now At 97% Completion, As NCC Moves To Auction Spectrum

The Nigerian Communications Commission (NCC) has said that the plan for deployment of Fifth Generation technology in the country has gotten to 97 per cent.
Executive Vice Chairman of NCC, Prof. Umar Danbatta, disclosed this at the annual African Tech Alliance Forum with the theme ‘Embracing changes and digital transformation in the new normal’.
According to a statement titled ‘NCC update on plans for 5G deployment’ issued  by the NCC’s Deputy Manager, Public Affairs, Kunle Azeez, the commission stated that some spectrum would be auctioned.
“Already, we are set for the auction of some spectrum slots in the 3.5GHz band. The other day, I was at the National Assembly, I informed the Senate that we were 95 per cent ready for 5G.
“Today as we speak, I am delighted to tell you that we are already at 97 per cent completion.
“The committee set up to auction the spectrum has already developed an information memorandum which is already published for inputs and comments from all industry stakeholders.
“Prior to this, a 5G deployment plan was developed and we have since secured the Federal Government’s approval”, the commission stated.
The commission also explained that because of the Covid-19 pandemic, almost every means of communication became virtual, which led to an increase in network connectivity requirements as a result of unprecedented upsurge in internet traffic.
Danbatta added that even though the network infrastructure in the nation demonstrated some capacity to contain the surge in internet traffic, a lot of work was being done by the commission to boost network capacity, sensitise the public and ensure accessibility to affordable connectivity.
“Emerging technologies such as 5G, which NCC is driving aggressively in Nigeria, Internet of Things; Cloud Computing; Quantum Computing Augmented/Virtual Reality, and similar emerging technologies are playing a critical role in improving remote communication over the internet with great user experience.
“The NCC is committed to promoting this inevitable change and enhancing user experience through effective regulation of the telecoms sector”, he stated.