Gunmen suspected to be members of the dreaded Boko Haram sect have kidnapped a prominent politician in Borno State, Stephen Abba Madu Marama.
Marama was kidnapped on Sunday while on his way from the village to Maiduguri, the Borno State capital.
Speaking to newsmen in Maiduguri, a close relation to the kidnapped politician, Bundi Madu, revealed that his abductors had demanded to speak with the Borno State Governor, Kashim Shettima and Senator Mohammed Ali Ndume.
According to Madu, “We have been trying to get across to the state Governor, Kashim Shettima and Senator Mohammed Ali Ndume but to no avail.
“Now, we are confused because the kidnappers, who spoke with us, using our father’s phone, told us that if they did not get to speak with either the Borno State governor or Senator Mohammed Ali Ndume in the next one hour, they would be left with no option than to execute him”.
He said, if they had demanded for money, they would have looked for it but that they were left with no option as the kidnappers only asked to speak with Governor Shettima or Senator Ndume.
“They are aware that these people are not easily available; I think they only want to kill him because they know there is no way we can get these people to speak with them. Our family is destabilised since we received the call that our father has been kidnapped”, Madu added.
Our correspondent gathered that the politician, who had aspired for the governorship of Borno State was kidnapped while driving alone in his Lexus Jeep LX 470 shortly after a military check point in Damboa Local Government Area of Borno State.
It was also revealed that he is interested in contesting for the Southern Borno senatorial seat in 2015, on the platform of the All Progressives Congress (APC), and is already gaining the people’s support, as they are clamouring for a representative, particularly from the Biu, Hawul axis.
Meanwhile, the Director of Defence Information, Maj-Gen Chris Olukolade, has said five members of the Special Forces engaged in the ongoing counter-terrorism operatives have been killed by the insurgents.
Olukolade said the late military personnel comprised an officer and other ranks in the Army.
Olukolade added that the military had intensified action against the terrorists around Wala, Gwoza and Pulka and other areas in the location.
The Defence spokesman said the soldiers were killed in an ambush in which several of the terrorists were also killed.
He stated also that several terrorists were killed in the joint operation by ground forces and fighter jets of the Air Force.
Olukolade said, “the assault on terrorists’ enclaves in Sambisa forests and surrounding locations is continuing. Operational activities around Wala, Gwoza, Pulka and environs have been intensified.
“Encounters resulting from air and land strikes and an ambush of troops on patrols in the area have resulted in the death of scores of terrorists and loss of five soldiers including an officer.”
He explained that the Special Forces responded to a distress call from a community around Lake Chad and prevented insurgents from carrying out a planned attack in the area. 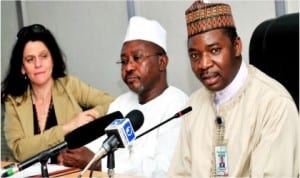