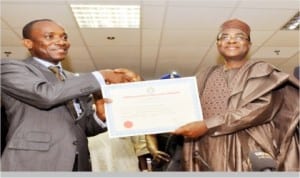 There are indications  that members of the House of Representatives Committee on Public Accounts had come under intense pressure to tread softly on their ongoing investigation into the alleged financial excesses of the Minister of Petroleum Resources, Mrs. Diezani Alison-Madueke.
It was also learnt in Abuja that Alison-Madueke chartered a third jet for her use, besides the two already in the records of the committee.
The Solomon Olamilekan-led committee is investigating the expenditure of N10billion on a Challenger 850 chartered and maintained for the minister’s use.
It was reported on Wednesday that the committee was holding preliminary meetings on the investigation when it stumbled on fresh information that Alison-Madueke also chartered a second jet for her trips.
A source disclosed that a return trip on the Global Express XRS to London for example, gulped €600,000 or N137million.
However, a lawmaker told our correspondent that since the House passed the resolution last week to probe the allegations against the minister, “forces within Nigeria, especially outside the National Assembly,” had been calling some of the committee members relentlessly.
He said, “At a point on Tuesday, the pressure became unbearable. I think people are beginning to think that the House is embarking on a witch-hunt. But that is not the idea.
“We are doing our constitutional duty to expose corruption wherever it exists.
“If at the end of the day, the investigation proves that it was justifiable for a minister to spend billions of naira to charter aircraft, so be it.”
Efforts to get key members of the committee to comment on the alleged pressure hit a brick wall.
Olamilekan neither answered our correspondent’s calls nor replied text messages on Wednesday.
When contacted, the spokesman for the House, Mr. Zakari Mohammed, said it would be inappropriate for the House to speak on a matter it had referred to its committee for investigation.
“The matter is before the committee”, he said.
Findings by our source on Wednesday showed that the committee was gathering information on the existence of a third jet chartered by the minister for the same purposes as the first two.
A source close to the Public Accounts committee, who confided in our correspondent, said, “From available information, “there are three aircraft the minister charters for her trips within and outside the country. “What they were doing was to alternate the planes,”
The source, who did not want his name in print, was however quick to add that the committee’s assignment was only to investigate and not to indict anybody.
“Well, the assignment before the committee is an investigation. Nobody has been accused of any wrongdoing for now, but we have to establish all these allegations,” he said.
It was learnt as of 4pm on Wednesday that the committee was yet to decide on the date it would summon Alison-Madueke.
A meeting of the committee, which reportedly started around 1pm, had still in progress as of 4pm.
Top on the agenda were said to be the allegations against the minister.
Another source said, “The members are meeting to discuss the methodology to adopt in the investigation.
“An aviation consultant is assisting with additional information.
“Essentially, the investigation is to establish whether the minister did spend these huge funds on the jets.
“Who approved the funds? Was the money appropriated by the National Assembly?
“What aspect of our laws allows a minister to fly in chartered aircraft overseas for her private or official trips.
“These are the issues and all agencies or officials involved will be invited to state their side of the case.