Mrs. Joyce Ebua, sister of the Bayelsa State Commissioner of Sports, Mr Mitema Obodor, who was kidnapped in her Oloibiri residence in Ogbia Local Government Area of Bayelsa has regained her freedom.

The release of Mrs Ebua, who was forcefully separated from her family 10 days ago by unidentified gunmen, according to a family source, was made possible after ransom had been paid to her abductors.

According to the source, the 60-year old woman was dropped off by her captors at a coastal settlement from where she was received at about 12.30pm yesterday.

Reliable sources in the security services and the family of the victim, who participated in the freedom deal, said ransom was paid to the kidnappers, but refused to publicly disclose the sum.

Bayelsa Commissioner for Sports, Obodor, confirmed the release of his sister, but strongly denied that any ransom was paid to set her free.

Obodor said officials of the State Security Service (SSS) were instrumental in arranging the freedom of Mrs. Ebua even though none of the kidnappers have been arrested.

The gunmen shot sporadically during the operation to kidnap the victim in a bid to scare-off people in the neighborhood where she lived just before whisking off Ebua to their camp.

Police Public Relations Officer in the state, Alex Akhigbe, also confirmed the release of Mrs Ebua but said, police authorities were not involved in the negotiations to free her, or the exchange.

It would be recalled that kidnapping has become a frequent occurrence in Bayelsa in spite of legislation stipulating death penalty for the crime, especially in Ogbia Local Government where President Goodluck Jonathan comes from.

The law, enacted over a year ago, is yet to be tested, and has not led to the capture or conviction of any suspect(s).

While an uncle and foster father to President Goodluck Jonathan, Chief Nengite Nitabai, recently regained his freedom from a kidnap incident last week, another close relative of the president, a cousin, avoided being kidnapped on the same day Nitabai was rescued.

It was learnt that Nitabai was set free by his abductors after receiving cash pay-out of N500 million, an amount that was earlier demanded by the kidnappers, who took him to Odioama, near Brass in the coastal fringe of the state. 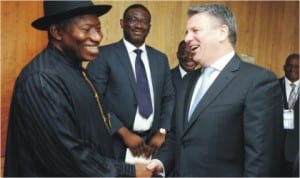