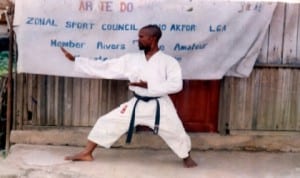 Liberation Stadium in Port
Harcourt has been described as the most convenient ground for teams and officials especially in the professional women league.
Technical Adviser of Rivers Angels FC, Godwin Okon, made this known shortly after one of the week two fixtures played between Rivers Angels and Sunshine Queens of Akure in the main bowl of the Liberation Stadium over the weekend.
According to Okon, Port Harcourt is one place where matches are being officiated fairly saying that, the Garden City has the best officiating in league competition.
He said that his team created lots of chances but converted only two to goals, saying that, it was not enough.
“Though, I am happy that we took the three points, but, the players should work on their scoring skills, not just to be good on one side”, he said.
Earlier, coach of Sunshine Queens of Akure, Kenneth Boboye, attributed his team’s defeat to the Angels to fatigue, poor officiating and traffic .
Boboye said that his team was caught in traffic on their way to Port Harcourt, noting that, these caused fatigue on his players, which he said affected their performance.
“It happens at times, the management of the team should do something in order to release fund on time, so as to leave our home early whenever we have away match”, he said.
He however, pointed out that the officiating was bad, saying that free kicks were not awarded to them and that referee worked against his side.
Meanwhile, the match ended in 2-0 against Sunshine Queens, as the Angels Asisat Oshoala and Ngozi Ebere scored at the 57th and 63rd minutes of the game respectively to give the Angels all three points in the game.