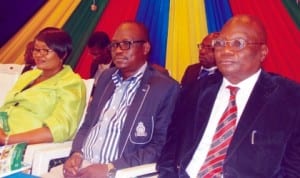 The All Progressives Congress (APC), Rivers State chapter, has expressed shock and disbelief over the alleged zero allocation to Rivers State in the 2014 budget of the Federal Ministry of Works.
In a statement yesterday, signed by Senior Special Assistant on Media and Public Affairs to the Interim State Chairman of APC, Eze Chukwuemeka Eze, said that “what this means is that Rivers State will not receive allocation for any Federal Government project this year”.
According to Eze, “if the claim of the Minister of Works, Architect Mike Onolememen, while defending the ministry’s budget on Tuesday before the House of Representatives Committee on Works, that neither the Federal Government nor his ministry was at war with Rivers State is true, what could have warranted the omission of Rivers State from the list of states that will enjoy Federal Government presence in terms of capital projects execution this year?”
The statement noted that the Federal Government’s action was very sad and condemnable, especially when it is realised that the bulk of revenue accruing to the Federation Account comes from Rivers State.
“It is simply unbelievable that President Goodluck Jonathan could stoop so low to direct the Ministry of Works to ignore Rivers State in allocation of funds for development projects just because he has some differences with the state Governor, Chibuike Rotimi Amaechi”.
The party commended Chairman, House of Representatives Committee on Petroleum Resources (Downstream), Hon. Dakuku Peterside, for proving to be a worthy representative of the people of Rivers State by staging a walk-out in protest over the zero allocation to the state during the Works Ministry’s budget defence.
The statement quoted Peterside, who represents Andoni-Opobo/Nkoro Federal Constituency of Rivers State in the House of Representatives as saying that, “I decided to leave the budget session on discovering from the ministry’s details of on-going projects and 2014 budget proposal that there was no single allocation for projects in Rivers State. The few projects listed in Rivers State got zero allocation. For such criminal neglect, there is definitely more to this omission than meets the eye”.
A breakdown of details of on-going highway and bridge projects in Rivers State shows that no single allocation was given to such projects as the construction of Eleme Junction Flyover and dualization of the access road to Onne Port in Rivers State; access road to Eleme Refinery; construction of Bodo-Bonny Road with a bridge across the Opobo Channel and the rehabilitation of the Abalamabie (Allison Hart) bridge, the party emphasised.
The APC recalled that the Rivers State Government awarded contract for the Eleme Junction Flyover in 2008, and the project was completed in 2009.
The statement regretted that “under the watch of President Jonathan, Rivers State has lost much revenue as our oil wells were transferred to neighbouring states. They have taken away the oil wells in Soku and given them to Bayelsa. They have taken the ones between Oyigbo and Etche and given them to Abia. So, our resources continue to dwindle.
“Another area that the administration of President Jonathan has haunted Rivers people include the blatant refusal of the Minister of Finance, Dr. Ngozi Okonjo-Iweala, to sign the necessary documents that would have assisted the state to obtain an African Development Bank (ADB) loan to provide pipe-borne water for the state and save people from dying from water-borne diseases.
“The Federal Government has also refused to authorize the release of the two surveillance helicopters procured by the Rivers State Government at N30billion, thereby forcing the state to pay unnecessary demurrage in hard currency annually. These helicopters would have assisted the Federal Government to fight oil theft in the Niger Delta region and check the dwindling revenue accruable to the Federation Account”.
The party further regretted that refusal by the Jonathan administration to implement the United Nations Environment Programme (UNEP) report that would have assisted in the cleanup of the ecological devastation of Ogoniland.
The APC expressed deep sadness over the bizarre turn of events as orchestrated by the Presidency.
“As a federating state of this nation, paying our taxes and contributing much to the revenue of this country, Rivers State deserves no less than an equitable share of revenues accruing from its resources and due it constitutionally,” the APC said.
It, therefore, demanded an end to this senseless war against the good people of Rivers State, who are the new face of change in the country so desperately needs.