Nigerian women have
called for more stringent laws to reduce their vulnerability to rape and other forms of violence against them in the country.
Mrs Charity Analikwu, a resource person, made the call in a lecture entitled “Elimination and Prevention of All forms of Violence Against Women and Girls’’ which she delivered at the International Rural Women’s Day celebration in Awka recently.
Analikwu listed some of the violence against women to include rape, marital rape, domestic violence and honour killing, a situation where any woman perceived to have brought shame to her family is killed.
Others are stalking, forced marriage, acid bath, mob violence, sexual harassment, maltreatment of widows, female genital mutilation, forced abortion and discrimination based on gender.
She said Nigeria, being a signatory to the various UN agreements on gender equality, should enforce the relevant laws and urged women lawmakers to sponsor more legislation to protect women.
“There should be accelerated efforts to prevent and eliminate all forms of discrimination against women and girls to ensure equal enjoyment of all fundamental rights and freedoms.
“More laws  should be introduced to protect the women from violence,’’ she said.
Also speaking, the Commissioner for Women and Social Development, Mrs Henrrieta Agbata, who distributed cancer self- examination kits to the women, urged rural women to exploit the opportunities in the agriculture sector.
She promised continued assistance to women after distributing gifts including food items to mothers who had multiple births of three and above as part of efforts to enhance their welfare.
One of the couples who benefitted, Mr and Mrs Kelvin Atulegwu from Ukpor, Nnewi South,  expressed gratitude to the state government, noting that it was not easy nurturing triplets with other children.
Our correspondent reports that the event was organised in collaboration with the Office of the Wife of the Governor, NAPTIP, UNDP, wives of council chairmen and councillors. 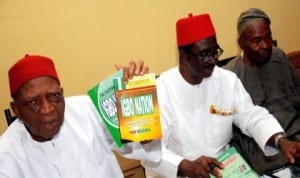