Adamawa
The National Emergency Management Agency
(NEMA) has expressed concern over the poor participation of the private sector in emergency relief response for Internally Displaced Persons in the North East.
Alhaji Muhammed Kanar, North East  Zonal Coordinator of the agency, expressed the concern in an interview with newsmen in Yola, recently.
Kanar said that the attitude of leaving everything to government was over, as it could not afford to carter for the needs of all the people.

Rice farmers in Itas-Gadau Local Government Area,
Bauchi State, have said the Federal Government’s N3.6 billion Mechanised Agriculture Intervention Fund would reduce the cost of their activities when disbursed.
The Chairman, Rice Farmers Association of Nigerian (RIFAN), Malam Auwalu Saidu, Itas-Gadau Local Government chapter, made the assertion in an interview with newsmen at Gabu.
He commended the Federal Government for coming up with the intervention, saying it would boost food production nationwide and make agriculture more lucrative.
“With this intervention, tractors and other farm machinery will be provided for hire at affordable prices to the farmers just as seeds; fertiliser and water pumps are being provided.

No fewer than 4,000 people in Borno State were
engaged in community-based development activities under the Subsidy Reinvestment and Empowerment Programme (SURE-P) in 2013.
The SURE-P Coordinator in the state, Malam Wakil Kalanga, made this known in an interview with newsmen in Maiduguri recently.
Kalanga said that the participants were being empowered under the Community Services, Women and Youths Employment (CSWYE) project of the SURE-P.
He said that the beneficiaries were drawn from the 27 local government, included youths, women and vulnerable groups selected by the community leaders in their various localities.

A commercial agricultural firm, Savannah Integrated
Export Processing Farm, has provided 1,504 acres of subsidised land to 1,000 farmers at Dadin-Kowa irrigation site to boost irrigation farming in Gombe State.
The farm manager of the firm, Malam Nasiru Umar, spoke to newsmen in Dadin-Kowa town recently.
Umar said the firm provided land to the farmers at subsidised rate, cultivated the land and gave to farmers of different crops at the site.
The farm manager said the company had wanted to give them water for irrigation, but could not do that and advised them to dig shallow wells.

The Jigawa State Government said it had spent N371
million to purchase vehicles for the 25 council chairmen in the state.
The state Commissioner for Local Government and Chieftaincy Affairs, Alhaji Salisu Ndarawa, said this in an interview with newsmen in Dutse.
Ndarawa said 25 Toyota Prado Jeeps were purchased for the chairmen, adding that nine of the vehicles had been delivered to some of them.
The commissioner said the remaining 18 would be delivered soon.
Kebbi
The Kebbi State House of Assembly has con
firmed the reappointment of Alhaji Kindi Zauro as a commissioner in the State Independent Electoral Commission (SIEC).
Our correspodent reports that Governor Saidu Dakingari had requested the legislature to approve the reappointment after Zauro’s tenure expired five months ago.
The Speaker, Alhaji Habibu Jega, who presided over the plenary session, said members endorsed the reappointment unanimously after a voice vote.
Meanwhile, the House has also confirmed the appointment of Malam Hassan Dakingari as a Special Adviser to the governor on Micro Finance Banks.

An Ogudu Magistrate Court in Lagos State has
sentenced a 25-year-old ‘pure water’ hawker, Musa Sule, to one year imprisonment, with hard labour, for stabbing a colleague.
The Chief Magistrate, Mrs Omolade Awope, sentenced Sule after he pleaded guilty to a one-count charge of assault.
Delivering judgment, Awope described the action by the convict as “callous”, adding that Sule must be very violent.
“Sule saw a knife just lying fallow in a tomato seller’s shop, picked it and put it in his pocket. What attracted him to the knife and for what intent?

The Nasarawa State Government said that it had
constituted an 11-man committee to tackle the spread of communicable diseases in the state.
The Commissioner for Health, Dr. Emmanuel Akabe disclosed this in an interview with newsmen in Lafia.
According to him, the move is  to ensure quick response in the event of any outbreak of diseases as well safeguard the lives of the people.
Akabe said that there were reported cases of Cholera, Lassa fever and other communicable diseases in Lafia and other parts of the state recently, which resulted to loss of lives.
Ogun

The Minister of Interior, Mr Abba Moro, has appealed
to traditional rulers to caution politicians in their domains against  activities capable of aggravating the security challenges facing the country.
Moro made the appeal in Abeokuta when he paid a courtesy call on Oba Adedotun Gbadebo, the Alake and paramount ruler of Egba land.
He visited the monarch shortly after inaugurating  an administrative block and 36 units of staff quarters at the Civil Defence College of Security Management in Abeokuta.
The minister expressed concern over incidents  of insurgency, militancy and communal clashes in some parts of the country.

A chieftain of the All Progressives Congress (APC), Dr
Usman Bugaje, has advocated the formation of political parties in Nigeria, based on “content, conscience and courage.”
Bugaje said this at the maiden edition of the monthly lecture series, organised by the Muslim community, Usmanu Danfodiyo University, Sokoto.
He also called for the use of modern technology  to transform political parties and democracy and stressed the need for vibrant civil society organisations as panacea to the nation’s political problems.

The authority of the Federal Government College, Buni-
Yadi, in Yobe State, Mr Ibrahim Abdul, has confirmed that 29 of its students were killed by insurgents who attacked the institution on Monday.
A Senior Master, gave the figure while receiving Gov. Ibrahim Gaidam during a sympathy visit to the school.
Abdul said that 11 students also sustained various gunshot wounds.
He said that all the hostels and classrooms were burnt by the insurgents who attacked the college at about 11.30 p.m.

Zamfara
The Zamfara State Government has distributed more
than N20 million as assistance to victims of a recent attack in Tungar Rakumi Village of Maru Local Government Area.
The villagers were attacked three weeks ago by unknown gunmen, who killed 25 residents, burnt down houses and foodstuff and injured many others.
Chairman of the committee set up to distribute the money, Alhaji Sani Mayanci, said it was meant to serve as assistance to families of the victims.
He said the families of those who died would receive N300,000 each while others affected by the incident would be given N100,000 each. 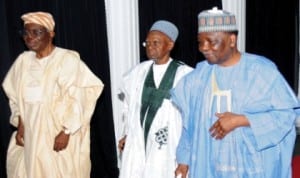