What perhaps could
pass for the biggest vote of confidence ever enjoyed by President Goodluck Jonathan, since  assumption of office, came last Monday from leaders of the southern part of the country under the aegis of Southern Leaders’ Summit.
The group, comprising very eminent Nigerians including former Vice President , Dr Alex Ekweme, Pa Olaniwu Ajayi, Pa Ayo Adebanjo, Obong of Calabar, Edidem Ekpo Okon Abasi Otu, Chief Emmanuel Inwuanyanwu, Dr Edmond Daukuro, the Amanyanabo of Nembe Kingdom, affirmed its unflinching support for the Jonathan administration.
Our correspondent reports that the summit also applauded him for the forthcoming National Conference.
In a three-page communiqué read by its Chairman, Chief Olu Falae, at the end of its one-day summit held at the Tinapa Business and Leisure Resort, Calabar, Cross River State, the group particularly commended President Jonathan for what it noted as his commitment and dogged efforts in combating the menace of insecurity in the country.
The Southern leaders noted that in spite of the security challenges, the President had made remarkable progress in the development of critical sectors of the Nigerian economy, particularly in the areas of power, transport, aviation, agriculture, as well as direct foreign investment.
The Summit which considered issues such as the indissolubility of Nigeria, the practice of true federalism, the current security challenges, the economy as well as the forthcoming National Conference had delegates from the South West, South East and South- South, drawn from the traditional institution, the academia, public sector, politics, the judiciary, labour and religious bodies.
According to the communiqué, “At the end of deliberations, we the leaders and people of Southern Nigeria resolved as follows that Mr. President, Dr. Goodluck Ebele Jonathan, be commended for his commitment and dogged effort in fighting the menace of insecurity; and noted that in spite of these security challenges, Mr. President has made remarkable progress in the development of critical sectors of the Nigerian economy, particularly in the areas of power, transport, aviation, agriculture and direct foreign investment.”
The summit further noted “That we commit ourselves to a united and indivisible Nigeria based on the principles of justice, equity and rule of law with ample respect and understanding for cultural, linguistic and religious differences.”
It said the Federal Government “Must revisit the issue of the loss of territory, particularly as it relates to the loss of the Bakassi Peninnsula,” and recommended the excision of solid minerals from the Exclusive Legislative List, just as it asked for an increase in the percentage of revenue derivation from oil and gas.
Similarly, the summit demanded for the quick passage of the Petroleum Industry Bill currently before the National Assembly.
“That we endorse an increase in revenue allocation to the federating units in a way that takes cognisance of the new responsibilities and residual powers of the federating units; that in line with the principle democratic governance, decisions at the forthcoming National Conference should be by simple majority,” it added.
The communiqué was signed by Chief Olu Falae, Chief Tony Anenih, Governor Liyel Imoke, Governor Peter Obi, Governor Olusegun Mimiko, Governor Martin Elechi, Governor Emmanuel Uduaghan, Governor Godswill Akpabio and Mr. Rasaq Oladesu. 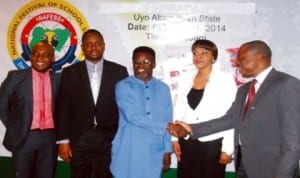