The Senate committee on marine transport has vowed not to pass the 2014 budget of the Nigeria Ports Authority (NPA) in the National Assembly until the agency satisfactorily convinces the committee about the success level of projects embarked upon with the previous budget.
This was disclosed by the chairman of the Committee, Hajia Zaynab Kure at the authority’s Headquarters during the oversight visit of the senators to the agency over the performance of the 20 13 budge, recently.
It was gathered that the committee Chairman’s threat was due to the absence of the Managing Director of NP A, Mallam Habib Abdullahi during the visit of the committee to the agency.
Senator Kure disclosed that the committee members came down to Lagos to see things for themselves before passing the agency’s 2014 budget, but was disappointed with the level of reception given to them by the Management of NPA.
Kure said, “We feel it is pertinent that we appraise NPA’s performance with the 2013 budget before passing the 2014 budget of the agency. But now that nobody is here to give us brief of what has been done with the 2013 budget, our hands are tied on what to do with the 2014 appropriation budget.
“If we wanted just the budget performance appraisal, we could do it in Abuja. But we wanted to come and see on-going projects, that is why we came down to Lagos,” she stated.
The wife of the former governor of Niger State tagged Abdulahi’s absence during their statutory oversight visit to the agency as a sign of disrespect to her and other members of the committee.
Reacting, Hajia Zaynab Kure said, “on behalf of my distinguished colleagues, I want to express my disappointment and displeasure, and of cause embarrassment of the Committee at the inability of your MD to receive an esteemed committee made up of distinguished senators that have come on an oversight function to the NP A.”
She further stated that, “this honourable committee wrote about two weeks ago to NPA that we are coming on a constitutional and statutory assignment. If for any reason the MD, who must have received the letter, knew he won’t be around to receive us, he should have written back to us that he has another assignment that he feels is much more important than receiving this committee”, she lamented.
She continued, “But there was no communication. I only got a call from the NP A MD on my way to the airport, by which time all my other colleagues have even boarded the aircraft, informing me that he won’t be able to receive us.”
“I did not tell my other colleagues because I thought that if I had done that, I won’t be doing justice to what has brought us here. I wanted everybody to come and see things for themselves. Except for one of us, every other member of this committee is here for this oversight visit.”
“We are all here because we have taken our job so seriously. Most of us left other important assignment back home because we want to discharge our responsibilities as a committee that is concerned about the maritime sector of this country.
“But for us to get here and the MD is not here, i must tell you that the committee is seriously disappointed and we are not happy at all. We want you to communicate same to your MD.
“We know that you are working as a team but the MD has no right, whatsoever, to have treated us the way we are treated today. We should have known that he won’t be here and would have possibly rescheduled our trip.”
Corroborating her, another member of the committee, Senator Ben Ayade called the action of the NPA MD as an absolute disrespect to the National Assembly.
In his words, “the last time we were here, the NP A MD was eager to receive us, but, that enthusiasm has dwindled.
“If feel highly compromised. I thing there is an absolute disrespect for the National Assembly. This conduct is deliberate. I find it very insulting. 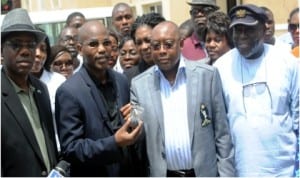