President Goodluck Jonathan yesterday promised that no resource will be spared in bringing to justice all murderers engaging in violent activities in the northern part of the country.
Speaking at the Centenary Conference in Abuja, themed: “Human Security, Peace and Development: Agenda for the 21st Century,” Jonathan said Africa must address some fundamental challenges to the continent’s human security, peace and development.
He said, two days ago, terrorists invaded a secondary school and murdered innocent children in Yobe State, while they slept. The children, the hopes of their parents and the future leaders of our dear nation, had their hopes and dreams snuffed out, leaving behind grieving families, schoolmates, communities and a sad nation.
“Our prayers and thoughts are with their families at this difficult moment of loss. This gruesome and mindless act of savagery is not Nigerian. It is not African. Let me assure all Nigerians that we will spare no resource in bringing those murderers to justice”, he said
Jonathan said that the cost of wars and insurgencies are too high and that Africa has been estimated to lose $18 billion per year from wars and insurgencies.
“In concert with our regional and global partners, we will continue to respond strategically and decisively to this scourge, and together with our people, we shall end the killings and bring terrorism to an end.
“Your Excellencies, let us work together across boundaries, not only to coordinate and strengthen our defences, but also to address any socio-economic roots on which these extreme ideologies thrive”.
He said that greater regional cooperation in intelligence gathering and control of insurgents will not only ensure Nigeria’s security, but also the security of her neighbours.
In a related development,  nearly 300,000 people, more than half of them children, have fled their homes in northeast Nigeria since May last year because of violence linked to the Boko Haram according to the United Nations.
Three states in the region have been under emergency rule since last May 14, when the military launched a massive offensive to stamp out the insurgency, which has killed thousands since 2009.
Credible figures, including casualties, have been difficult to obtain, as waves of attacks across a swathe of remote villages have made it impossible for most rescue agencies to operate.
But the UN’s humanitarian office, OCHA, said a total of 290,002 people have been internally displaced in the three states under emergency rule — Adamawa, Borno and Yobe  as of January 1, 2014.
Meanwhile, soldiers abandoned checkpoints and fled into the bush, leaving five villages and a town at the mercy of Islamic extremists who killed at least 33 people and firebombed a theological college in overnight attacks in Adamawa that lasted hours, survivors said yesterday.
On Tuesday, extremists killed 59 students when they struck a school in Yobe State, hours after soldiers were inexplicably withdrawn from a roadblock set up to protect the institution.
The recent string of assaults in an Islamic uprising gripping the northeast of Africa’s biggest oil producer comes amid widespread criticism of military failures despite a 9-month-old state of emergency.
“It is curious that under an emergency rule when security operatives are on red alert, this mayhem still persists,” Senate President David Mark said Wednesday in a statement calling the attacks an “open declaration of war.” 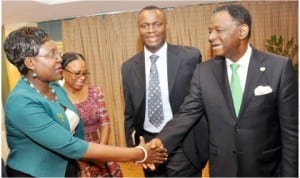