A recent national
forum on mainstreaming gender in governance, organised in Abuja by National Orientation Agency (NOA) and National Centre for Women Development (NCWD), provided another platform for women to canvass adequate participation in politics.
Nigerian women have, on many occasions, been agitating for the rectification of what they describe as lopsidedness in the public office appointments which, they say, are not in their favour.
The women observe that since Nigeria’s independence in 1960, they have been struggling for inclusion in the affairs of the country in spite of their numerical strength and waxing influence.
Citing the country’s general election in 2011 as an instance, they claim that female candidates fared poorly, with only 32 women elected into the National Assembly.
The women point at current records, which indicate that only nine women are among the 109 senators in the Senate, while 27 women are in the 360-member House of Representatives.
However, the women’s advocacy has received the attention of the United Nations Development Programme (NDP) which, via its Democratic Governance for Development project, developed a pilot scheme recently to boost women’s participation in politics.
The scheme particularly aims at supporting the involvement of more female candidates in elections, especially at the local level; as it represents the springboard to the other levels of government.
The programme has trained more than 1,300 female politicians and voters in two pilot states — Plateau and Ekiti — while at the national level; more than 2,000 female politicians have received training in various electoral processes.
Stressing the need for increased women’s participation in politics at the forum, Ms Onyeka Onwenu, the Director-General of NCWD, said that Nigerian women did not have to beg for positions.
She emphasised that the Nigerian women should go beyond the 35 percent affirmative action, set in the 1995 Fourth World Conference on Women in Beijing, and demand for 45 percent representation as their right.
She said that no nation could develop without the input of women, adding that tangible efforts should be made to jettison attitudes which denigrated women.
However, the First Lady, Dame Patience Jonathan, gave the assurance that women would always be recognised in the country’s scheme of things.
According to her, this is because no country can achieve any meaningful development without the active participation of women.
In a message to the forum, Dame Jonathan pledged that  she would advocate a level beyond the 35 percent affirmative action, as part of efforts to boost women’s participation in governance to a level that was akin to that of men.
“We are no longer comfortable with the 35 per-cent affirmative action; what we now want is 50-50 with our male counterparts.
“Women are responsible for nurturing the future generation of the country; they should be considered for greater roles in governance,’’ she added.
Mrs Jonathan, however, called on the National Assembly to include the 35 percent affirmative action for women in the constitution, stressing that women would not relent in efforts to pursue their legitimate demands.
“We must continue the campaign on gender mainstreaming in governance, which I have been promoting with other women.
“The campaign has led to the establishment of the Women for Change Initiative as a platform for promoting women participation in politics,’’ she said.
Mrs Funmi Adeyemi, a civil servant, who spoke on women’s participation in politics, said that women should have more roles to play in politics, insisting that women were agents of change in any society.
Mrs Dorcas Jonah, a journalist, said: “Although nature has made it that men should dominate, women should, nonetheless, make themselves relevant in the scheme of things’’.
All the same, Mr Mike Omeri, the Director-General of NOA, said that “the current administration is bent on gender mainstreaming and it will build on the past efforts aimed at giving women and youths the chance to exhibit their talents.
“The agency is poised to take the campaign on gender mainstreaming to every part of the country, especially as it concerns the girl-child who must be educated.’’
The Minister of Culture, Tourism and National Orientation, Chief Edem Duke, said that women ought to be fully involved in the affairs of their country.
He said that President Goodluck Jonathan had pledged to give the needed support to women in their desire to have more representatives in governance.
Meanwhile, the National Democratic Institute, a non-governmental organisation that aids democratic institutions across the world, has said that the equitable participation of women in politics is essential for building and sustaining any democracy.
Former U.S. Secretary of State Madeleine Albright, the institute’s Chairman, said: “Every country deserves to have the best possible leader; that means women ought to be given a chance to compete.
“If they’re never allowed to compete in the electoral process; then, the countries are really robbing themselves of a great deal of talents.’’ 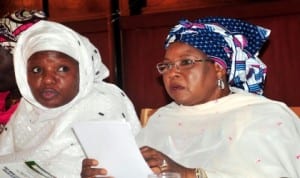 Permanent Secretary, Ministry of Women Affairs and Social Development, Dr Habibu Lawal (left), with the Minister, Hajiya Zainab Maina, at the National Stakeholders’ Consultative Preparatory Meeting on the 58th session of the United Nations Commission on the Status of Women in Abuja, recently.
Photo: NAN

Whither The Family Values?