Another crisis is rocking the Peoples Democratic Party in Rivers State as some members of the party besieged its state secretariat yesterday, demanding the resignation of the factional party Chairman, Felix Amaechi Obuah.
The protesters numbering over 200 alleged that Felix Obuah was pursuing the agenda of the Grassroots Development Initiative (GDI) and that of the Supervising Minister of Education, Chief Ezebunwo Nyesom Wike, thereby abandoning the aspirations and ambition of the party in the state.
Our correspondent, who monitored the protest for more than three hours, saw several placard carrying youths and women driven down to the secretariat in about 50 mini buses as early as 8.00am and occupied the premises till late afternoon hours.
The entire stretch of the service lane of the Port Harcourt/Aba Expressway was literally blocked.
The inscriptions on the buses indicated that the protesters came from the three Kalabari speaking local government areas of the state.
The protesters who formed themselves into two groups namely, Kangama Unity Forum (KUF) and Egberipapa Leadership Foundation, carried placards  with inscriptions such as ‘Obuah’ should resign now ‘’Obuah, you have failed PDP in Rivers State.’’ “We want Obuah to go ’’, “PDP is not GDI’’.
They condemned the leadership style of the state chairman, alleging that the party was at the verge of collapse under the present leadership.
The groups were seen beating drums and dancing in front of the party secretariat.
The protesters also warned against the overbearing influence of Chief Wike, who they accused of using his GDI platform to pursue his political ambition.
According to them, the minister has been using the GDI to feather his nest, especially his alleged governorship ambition in the state.
A leader of the aggrieved PDP members who is a legal practitioner, Dick Tubotamuno spoke with journalists over their grievances.
‘’We are here to register our displeasure over the leadership style of Obuah and let him know that we are not happy with his refusal to listen to advice. He, with the other members of the state executive, runs the PDP as if it’s GDI. There is no GDI in Akuku-Toru, Asari-Toru and Degema, the three Kalabari areas of the state.
Tubotamuno also expressed dissatisfaction with the utterances of some party officials in the state which he said did not promote peace and unity in the party and state.
Armed policemen were seen at the PDP secretariat to maintain law and order.
The Tide, however, learnt that while the protest was on, the factional state Chairman of the PDP, Obuah was in a meeting with the new state Commissioner of Police, Mr Johnson Tunde Ogunsakin and chairmen of other political parties in the state, at the Police Officer Mess, Forces Avenue, Port Harcourt.
Efforts to get the reactions of the Senior Special Assistant to the PDP Chairman, Mr Jerry Nedam, were not successful as he refused to answer his calls. 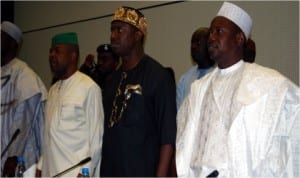