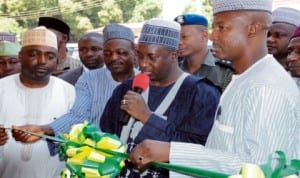 No fewer than 150 people were killed, weekend, in separate attacks in Baga and Izge villages of Kukawa and Gwoza Local Government Areas of Borno and Adamawa states by suspected members of Boko Haram sect.
About 96 persons were feared killed in Borno while 65 were reportedly killed in Adamawa between Saturday and yesterday.
Our correspondent gathered that the attack in Baga village bordering Chad Republic which took place Friday evening claimed 10 lives, while the massacre at Izge village, Sunday morning, left over 90 people dead.
Meanwhile, the Sultan of Sokoto, Alhaji Sa’ad Abubakar III, has asked Nigerians not to label Muslims as criminals due to the activities of Boko Haram insurgents in the North East, saying Boko Haram was not an Islamic group.
Abubakar spoke as the Governor of Osun State, Rauf Aregbesola, said the claims by Christians and Muslims that nobody could go to heaven except through Jesus Christ, or Prophet Mohammed, respectively, was the major cause of religious extremism or intolerance in the country.
They spoke at the first Annual Conference of Ahlus-Sunnah of Nigeria at the Tafawa Balewa Square, Lagos, yesterday.
The conference was attended by prominent Nigerians including Vice President Mohammed Namadi Sambo; former Head of State, Muhammadu Buhari; Governor Ramalan Yero of Kaduna State; Aregbesola; Speaker, House of Representatives, Aminu Waziri Tambuwal; Sultan Abubakar; former Secretary to the Government of the Federation, Alhaji Yayale Ahmed; Senator Idris Umar, and some ministers. Also in attendance was a representative of the President of Niger Republic.
Speaking at the conference, Sultan Abubakar said those who referred to Boko Haram as an Islamic sect were unfair to Muslims as the group comprised of criminals who were carrying terrorist activities against the country.
According to him, “Those terrorising us are not Muslims. They are terrorists. People should not be referring to them as an Islamic sect. They are agents of insurrection.”
Abubakar said Nigeria was not a secular country but is a multi-religious society, adding that Muslims should seek to live according to the dictates of their religion.
Other speakers blamed injustice, poverty and ignorance as major causes of disunity in the country.
They said there was nothing uniting a very poor man with an extremely rich person, as both groups were in two separate worlds.
Aregbesola, one of the guest speakers, quoted copiously from the Q’uran to buttress his point that Islam was a religion of peace. He said that what obtained in Yoruba as regards the healthy relationship between Muslims and Christians should be emulated by people in other parts of the country.
Buhari, who also spoke, said the panacea for peace included security and good management of the country’s resources.
“When Obafemi Awolowo was in the Western Region and Saduana of Sokoto, Ahmadu Bello was in the North, there were no religious crises because they managed the resources well. Awolowo was a Christian and he established the Muslims Welfare Board. May God Almighty give us a leader that can deliver in 2015,” the former head of state said.
In his remarks, Vice President Sambo said the conference, held under the theme, “Peace and Unity for Sustainable Development”, could not have come at a better time than this period, because of the security challenges facing the country.
Sambo said the recent anti-gay rights bill, which was signed into law, has further demonstrated that religion has taken its proper place in the country.