Rivers state indigenes in
Abuja, the Federal Capital Territory have hailed last Friday’s judgement of the Supreme Court which stopped the bid of, Sir Celestine Omehia to unseat the state governor, Rt. Hon. Rotimi Ameachi.
Sir Omehia had filed an application at the Court of Appeal seeking permission to participate as an interested party in an appeal before the Supreme court challenging the tenure of office of Governor Ameachi and was so granted.
However, the presiding judge, Justice Abdul Kafarati  gave judgement in favour of Chukwu, prompting Governor Ameachi to approach the appellate court to quash the decision of the trial court. It was during the hearing of Ameachi’s appeal that Omehia got interested in the case and filed an application at the Appeal Court seeking leave of the appellate court to allow him file processes in the case.
At Friday’s ruling  of the apex court, the decision of the Court of Apeal was set aside on the ground that Omehia  has no basis to join in the suit, having not fulfilled the condition precedent set by law. The apex court agreed in a unanimous judgement with the submission of Ameachi’s counsel that the Court of Appeal was in error by joining Omeahia in the suit as a party.
The president of Rivers state Community, Abuja, Chief (Barr) Brighten Saagwe, the state liaison officer, Mr John Enebeli, former member of the community’s Board of Trustees and Paramount Ruler of Ozuoha community, Ikwerre LGA, Chief Sam Ordu as well as President of Andoni Progressive Union (APU), Abuja branch, Mr. Fingesi were among Rivers people who reacted to the judgement in separate interviews with The TIDE.
They described the judgement severally as ‘’a welcome development and a big relief as it has put a final stop to the attempt to wrestle power from Governor Ameachi, using the judiciary as a tool and clears the coast legally for Governor Amaechi to continue with the execution of his people oriented-programmes’’.
‘’ To a considerable extent, the judgement is the elixir the governor requires to record more feats in the area of service delivfery so it’s a welcome development’’, they asserted. 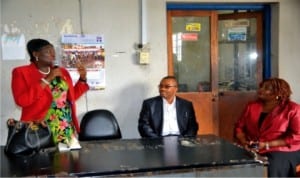