The people of Rivers State
have described last Friday’s Supreme Court Judgment in favour of Governor Chibuike Amaechi as a victory for democracy.
The Senator representing Rivers South East Senatorial District in the National Assembly, Senator Magnus Ngei Abe said the judgement by the Supreme Court is a victory for true Rivers people.
Addressing  journalists shortly after the judgement  that put an end to the move to remove Governor Amaechi, Abe said the judgement has shown that the governor cannot be removed unlawfully and illegally.
“I believe that any right thinking person will agree that it is time for us to put some of these things behind us.Since last year, there has been a concerted attempt to remove the governor from office and overthrow the Government of Rivers State by force and there is no provision in our constitution for that kind of behaviour.
“For us to turn Rivers State into a theatre of war because of the ambition of any single individual is morally, politically and spiritually wrong. We cannot kill ourselves here because of anybody’’,he said.
Also speaking to journalists, a member, representing Andoni/Opobo/Nkoro Federal Constituency,Hon Dakuku Peterside said the Supreme Court’s judgement was an indication that the judiciary is truly the hope of a common man.
According to him, “We have always had confidence in the judiciary, that is why we have not resulted to violence. We have absolute confidence first in God ,and secondly in the institution of the Supreme Court to be able to do justice according to the law.
‘’It is not about emotion and sentiments, we are glad that the Supreme Court did not disappoint the people of Nigeria and that its actions have deepened democracy.”
The Chief of Staff, Government House, Sir Tony Okocha said the Supreme Court judgment has ended speculations that Governor Chibuike Amaechi would be removed from office before the end of his tenure.
He said the Supreme Court’s verdict is a judgement that has sealed the move by detractors to unseat Governor Amaechi.
According to him, “My happiness is that it has ended the long speculations by failures who go around deceiving people that the governor would be unseated.
“With the judgement, the government will now sit down and concentrate on moving Rivers State to a greater height.”
The Board Chairman, Rivers State Sports Council, Charles Paul also hailed the judgement, describing it as a victory for democracy.
He assured that Amaechi will now settle down to take the people to the promised land.
‘’It is obvious that we are celebrating, it is a victory for democracy and victory for Rivers state. Others should come together to help Governor Amaechi build the State, the present government meant well for the State”, he said.
The Chairman of the Port Harcourt City Local Government ,Chimbiko Iche Akarolo said the Supreme Court’s judgment was not a surprise.
According to him,the Apeal Court can err, but the Supreme Court can not joke with the facts on ground.
He said it was clear before now that Omehia was a pretender and “for a pretender to come back and say he was interested in a suit that has to do with the elongation of tenure is slapping the Supreme Court in the face.”
The Obio/Akpor Peoples Forum, through its chairman, Mr Alex Chukwu also joined the people of the State to commend the judgment, just as the chairman of  RIVLEAF,  Alex Wele said the judiciary has again raised the hope of Rivers people, urging the people to join hands with the government to develop the State. 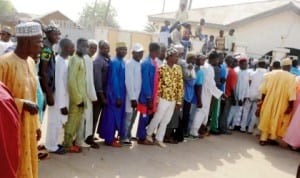 Now That Mbu Is Out …