The All Progressives Congress (APC) had described the actions of some thugs suspected to be supporters of Peoples Democratic Party (PDP) and Grassroots Democratic Initiative (GDI) as a declaration of war on the party and its members in the state.
The APC alleged that the hoodlums had since Wednesday done everything within their powers to cause bodily harm, kill, maim and eventually disrupt the party’s membership registration exercise in the state.
A statement signed by Special Assistant to the Interim Chairman of APC, Eze Chukwuemeka Eze, yesterday, said that the party had last Wednesday alerted security authorities and indeed, Rivers people, of plots by both groups to frustrate the APC registration exercise.
The statement said: “Unfortunately, our appeals for GDI and PDP in Rivers to have a rethink and give peace a chance have fallen on deaf ears as they have gone ahead to declare total war on the All Progressives Congress (APC) in Rivers State in their desperation to sabotage the on-going membership registration exercise in the state.
“We wish to cite the following cases: In PHALGA Wards 11, 14 and 16 one Vandam and one Nonso led 50 other hoodlums to shoot sporadically and hijack the registration materials, handsets and cameras of APC registration officials.
In Ward 9 in Obio/Akpor, the ward of Chief Nyesom Wike, the Supervising Minister of Education, hired thugs disrupted the registration exercise, beat up APC registration officers and hijacked registration materials.
In Ward 6 in Woji, the area where Chief Timothy Nsirm is the chief executor of the war against APC, one Eric Nyekazi Chioma led the operation with 30 other thugs, chasing out our people and shooting one of our key supporters, Chibuchi Ogbonda, who is now battling for life at Datta Clinic, Port Harcourt.
The statement added that Woji ward comprises five big communities of Woji, Rumurolu, Rumuibekwe, Oginigba and Rumuogba.
He added that “the same scenario played itself out in Ogu/Bolo and several other parts of the state.
Eze said that “worst hit is Degema, where one Andy was shot dead while six other APC members were inflicted with bullet wounds and machete cuts, and are currently hospitalized at BMH and some private hospitals in Port Harcourt.
“On Wednesday, APC Degema LGA Supervisory Committee Chairman for the Registration Exercise and former chairman, Rivers State Civil Service Commission, Mr. Ben Orugbani, escaped death when his house was shattered with bullets in Old Bakana.
According to Eze, the APC has “it on good authority that some of our top leaders, among them, the Interim State Chairman, Dr. Davies Ibiamu Ikanya, and Chief of Staff to the Governor, Chief Tony Okocha, among others, have been slated for elimination”.
“We wish to once more warn Wike and the PDP leaders in Rivers State to stop this madness henceforth as the consequences could be grave.
“We also appeal to the new Rivers State Commissioner of Police, Johnson Tunde Ogunsakin, to step in and decisively bring an end to this madness.
“While we understand PDP’s frustration at being roundly rejected by the people of Rivers State, this is surely not an excuse to plunge the state into chaos and rob the people of their constitutionally-guaranteed right to freedom of political association,” the APC added. 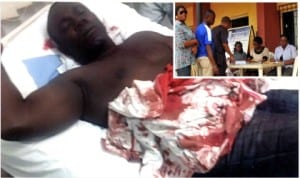 Special Adviser to the Chairman, Akuku-Toru Local Government, Mr Ominini Bibi on his hospital bed yesterday after the attack on him by suspected PDP and GDI assailants, during the APC registration exercise at Abonnema. Inset: Prospective members of APC waiting to register at Ward 12 Ojukwu Field Mile 1 in Port Harcourt, last Wednesday.