ort Harcourt, the capital
city of oil rich Rivers State and Nigeria’s Garden City apart from being the hub of oil and gas operations in Nigeria, it is also the home of entertainment and hospitality in Africa’s most populous nation.

Gone are the days when hoodlums held sway in the state as they have all surrendered to the federal governments’ gracious dovernment of Amnesty. This welcome gift  print has positive effects on the night life of residents of the city, while the entertainment outfits are having swell time, smiling to the bank at the end of the day.

The fact that Night life activities which had been in the Limbo before this present dispensation have been resurrected has incidentally led to a boom in prostitution as the scariest ladies have taken advantage of the peaceful environment in the state to boost  their inglorious sex trade by hiking theirs fees.

Despite the ravages of HIV/AIDS the sex trade is booming and attracting teenagers The Tide entertainment investigation discovered that these sex hawkers could be found in several night clubs in the capital city and environs, including Hotels celebrating joints and beer parlous, especially  around GRA, Hotel Presidential, Rumuola Junction and other hot spots.

On a casual drive around these areas from 11.00pm, one could easily find several half nude girls and ladies in their early 20s and late 30s wearing crazy tops, trapless blouses and knickers, they flunt their huge and highly attractive boobs and waists as they pace up and down as if doing a rehearsal.

The target of these  daughters of eve are the sex starred men, home seek expatriates and other sex seekers. Their charges range from N5,000.00 to N10,000  per round of sex, while the price for all night sex romp or till day break (DTB) is about N25,000.00.

Fortunately for these ladies of Easy virtues they have captivating influence on their preys as they are ever ready to pay any amount, while these harlots smile to the banks at the end of the day.

Our investigations also reveal that some of these ladies on parade are stunningly beautiful and most of them undergraduates. They are ever ready, willing and able to do the thing and collect their money. It is unfortunate that despite government’s efforts to discourage prostitution, the trade is gaining more grounds.

Apart from these prostitutes, Nude and pole dancers as well as strip dancers are also having a field day in the Garden City as some night clubs now parade them to attract more customers. Due to their high patronage these ladies of easy virtue from nearby state have invaded most of the popular hangouts in the state.

These ladies who have gotten accustomed to the freebies and huge monetary benefits that comes with dancing nude have embraced the profession with passion in other to eke a living from their only known profession.

It was gathered that these out of the way dancers are from the nearby states particularly Lagos as a result of the aftermath of hostilities that was declared on nude dancing by the Lagos State government.

Before now there have been repeated calls by management of some of the night clubs that was allegedly shut in Lagos for parading nude girls. The go-go dancers presumably got tired of waiting and due to the harsh economic situation of the country decided to take solace in other states where their trade is sort for.

Another group of dancers known as pole dancers also experience trade boom as a result of the patronage they enjoy in the state. In these joints fun seekers go there to relax, watch the girls who are mostly makossa  dancers and relax for the night in fact some regard the  night life as heaven on earth and are always found there wherever it is happening in town. 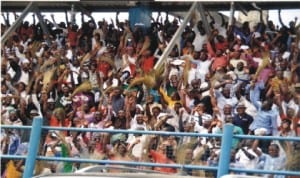 Fun seekers enjoying themselves in a club