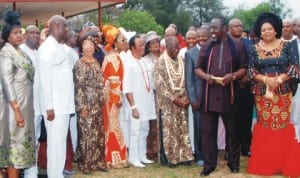 he Enugu State House
of Assembly last Tuesday passed the state’s 2014 appropriation bill of N93.7 billion. The House increased the budget by N478 million from the N93.287 billion proposed by the executive.

The budget, which has a recurrent size of N39.4 billion and a capital allocation of N53,9 billion when it was presented on December 10, 2013, had the capital size increased with N478 million to bring the capital expenditure to N54.4 billion.

Presenting the report of the Assembly Committee on Finance and Appropriation during plenary, the Chairman, Mr Johnbull Nwagu (PDP-Udi North), said the committee made eight amendments which produced the increment in the capital expenditure.

He said that the committee recommended that N15 million be budgeted for the extension of the Assembly complex fence and erection of iron barriers, with N13 million voted for the purchase of a generator for the complex.

According to him, sum of N3 million is added to the Ministry of Human Development and Poverty Reduction for the training of 250 unemployed youths from the 17 local government areas in auto-mechanics at the cost of N200,000 for 14 persons per local government. The committee recommended that N6 million be given to the Ministry of Agriculture to purchase operational vehicles for effective supervision of its projects.