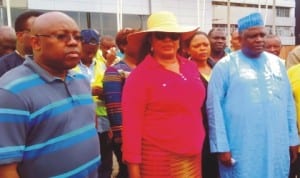 mirates, a global connec
tor of people and places, celebrates 10 years of successful operations in Nigeria, during which time it has carried out more than 26 million customers on the route, becoming the airline of choice for many in the country.

Emirates started operations in Nigeria on January 2, 2014, with four flights per week from Dubai to Lagos linked with Accra in Ghana, using an A330-200 air craft. Lagos become Emirates 73

rd destination in its network and its 10th  in Africa.

Today, Emirates flies to over 140 destinations across six continents 25 of which are in Africa. In 2005, just over a year after Emirates’ launch in Nigeria, it increased services from four to six flights a week and following steady growth and demand it became a daily operation in October 2006.

On January 1, 2006, Lagos was delinked from Accra and became a direct service to Dubai. On February 1, 2009, a second daily service was introduced and today each flight is served with a Boeing 777 – 300 ER.

The Boeing 777 – 300 ER is the backbone of the Emirates fleet, efficient to operate and popular amongst customers.

“Emirates is all about connecting people and places, Nigerians love to travel, explore the world and make new experiences, we are proud to have played a major role over the past ten years in connecting Nigerians, whether for business or leisure, to our ever-expanding world wide network through our Dubai hub. We look forward to continuing our growth to Nigeria by providing the best possible travel experience and value for money”, said Manoj Nair, Emirates Regional Manager for West Africa.

According to the Regional Manager, “the arrival of Emirates was a big boost for the local travel industry, as it opened up new links and opportunities for business and leisure travel. Dubai in itself has also become a very popular destination for Nigerians over the years, and today we are  a key market for the airline in the African region”, said the station manager Mr George Ikpekhia Lagos office.

Emirates currently employs 83 Nigerian nationals across its business in Nigeria and Dubai who has been with the airline since the start of operations.

Emirate Sky Cargo, the freight division of the airline, also played a key role over the past ten years in facilitating trade between Nigeria and its trading partners in the Emirate network.

In 2013 alone, more than 12000 tonnes of cargo, ranging from household goods to pharmaceuticals and construction equipment was imported into Nigeria using Emirates Sky Cargo services.

Underlining its position as one of the leading airlines in  the market, Emirates has won a number of awards in Nigeria for its outstanding service, the most recent being the NTA Transport Award in 2013 and the AKWAABA-Best Middle East Airline in Nigeria Award.