The Wife of the Vice President, Hajiya Amina Sambo,
says her NGO, ‘I Care Women and Youth Initiative’, would conduct cataract surgery for 500 people in Bauchi State.
Sambo, who was represented by the Secretary, Board of Trustees of the NGO, Col. Shehu Yahaya (Rtd), said this at the inauguration of the free eye care treatment on Saturday in Bauchi.
She said that according to the outcome of the National Blindness Survey, North- East was identified with highest prevalence of cataract in the country.
According to her, this informs the NGO’s decision to expand its scope of coverage from Kaduna State to North East region.

The Police in Benue State last Sunday confirmed a
fresh outbreak of hostilities between some Fulani herdsmen and Tiv farmers at Adaka village in Makurdi Local Government Area.
The command’s Public Relations Officer, Mr Daniel Ezeala,  said in Makurdi that renewed fighting between farmers and herdsmen broke out in the early hours of Sunday.
Ezeala said that the reasons for the clashes were not yet clear, but assured that enough police officers had been deployed in the area to quell the crisis.
He said investigation into the incident had commenced adding that details of the disturbance, including the magnitude of the destruction, would be made known as soon as the inestigatin was concluded.

The Nigerian Legion in Borno State  last Sunday dis
tributed grains and wrappers to widows in Maiduguri as part of its assistance to families of ex-servicemen.
The Chairman of the Legion in the state, Alhaji Mustapha Aliyu,  inaugurated the distribution at a brief ceremony in Maiduguri.
Aliyu said that the gesture was aimed at alleviating the suffering of the widows who lost their bread winners in the service of the nation.
He said about 100 bags of grains and 100 wrappers had been set aside for distribution to widows of ex-servicemen.

FCT
The First Lady, Dame Patience Jonathan, has condoled
with the wife of the Governor of Gombe State, Hajiya Adamma Dankwambo, over the death of her father, Alhaji Inuwa Gombe.
Jonathan, who visited the Gombe State governor’s wife in Abuja last Saturday, said the deceased would be missed by his community and urged the family to emulate his good deeds.
Gombe, who died on December 24, 2013, was a pioneer staff of the Nigerian Mining Corporation and retired as a permanent secretary in the ministry of power.

Governor  Muktar Yero of Kaduna State says the state
government has earmarked N3.5 billion to develop the education sector in 2014.
Yero said this at the 2013 Annual General Meeting of Barewa Old Boys Association (BOBA) at Barewa College in Zaria, Kaduna State last  Saturday.
Represented by Alhaji Ibrahim Ali, the Commissioner for Education, Yero said the money would be used for new schools, rehabilitation of the existing ones and supply of facilities.
In his speech, the BOBA National President, Dr Umaru Abdulmutallab, urged politicians to borrow a leaf from late Waziri Ibrahim, who advocated the slogan “Politics without bitterness’’.
Kano

The Kano  State Electricity Distribution Company said
last Sunday that some disengaged staff of defunct Power Holdings Company of Nigeria (PHCN), were using their Identity Cards to defraud unsuspecting customers in Kano.
The company’s spokesman, Alhaji Mukhtar Usman, who gave this indication advised residents to be wary of such individuals.
The spokesman explained that faults on electricity distribution facilities, were repaired free-of-charge, under routine maintenance services.
He therefore urged customers to contact the company’s business units whenever any individual demanded for money to effect repairs on such faults.
Usman also advised the fraudsters, to desist from the unwholesome act, warning that the full wrath of the law would be visited on them, when nabbed.
Kogi

The Kogi State Government has agreed to renovate the
private residence of the first civilian governor of the old Kwara State, Alhaji Adamu Attah.
In a statement issued in Lokoja last Sunday, the Special Adviser to the State Governor on Media and Publicity, Mr Jacob Edi, said that the renovation of the house, located at Kuroko, Adavi Local Government, was to facilitate the relocation of the former governor from Abuja to his hometown.
The statement said that the state governor, Capt Idris Wada ,who made the pledge during an inspection visit to the house, said that the matter was brought to his attention by some elders from Ebiraland.
“It is sad that Alhaji Adamu Attah is residing in Abuja instead of staying at home. An elderly statesman like him must live at home so that he can continue to contribute his quota to the development of the state,’’ the statement quoted the governor as saying during the visit.
Kwara

The Emir of Yashikira in Baruten Local Government,
Kwara State, Alhaji Usman Umar, has appealed for government’s assistance in the preservation and development of the indigenous culture and tradition.
The monarch who made the appeal in an interview in Yashikira at the celebration of the annual Gaani Cultural festival, asserted that a people without culture and tradition is like a tree without root.
He urged government at all levels to encourage traditional rulers in the development of their root, culture and tradition.
The traditional ruler explained that Gaani festival is celebrated in Bartonum and Borgu Kingdoms every year in commemoration of the birth of Prophet Mohammed.
Oyo

A former Governor of Oyo State, Chief Adebayo
Alao-Akala, last Sunday called on Nigerians to use the forthcoming national centenary celebration to re-orientate the new generation on patriotism.
He said that re-orientation would educate the youths on ways to build a great country devoid of oppression, tribalism and corruption.
Alao-Akala who made the call in an interview in Ogbomoso, said the nation had not measured up to expectations in the last 100 years, stressing that certain things were left undone.
“I cannot say categorically that we have progressed in the last 100 years, but we have not measured up to expectations. We have left certain things undone,’’ he said.

The Sokoto State Commissioner for Information, Malam
Danladi Bako, last Saturday said the state government would spend N3.7 billion for the construction of 45.5km Tangaza-Ruwa Road.
Bako said in an interview in Sokoto that the project was part of the state government’s transformation to link all the local government areas with good roads network.
The commissioner said the construction would also continue from Wuri-Kalmo linking Tangaza and Illela Local Governments adding that it will further enhance the socio-economic and political growth of the state.
He called on the people of the two local governments to cooperate with the construction firm to ensure early completion and expressed confidence that the work would be completed within the 15 months scheduled period. 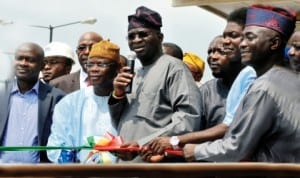 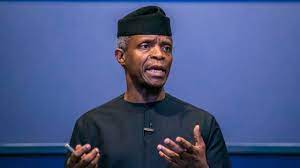 Osinbajo spoke when he received the Oluyin of Iyin Ekiti, Oba Adeola Adeniyi Ajakaiye at the Presidential Villa, Abuja, yesterday.

At the meeting was the Minister of Industry, Trade and Investment, Niyi Adebayo, and Senator Opeyemi Bamidele.

Osinbajo recalled that Buhari recently constituted a committee to look at the security infrastructure of the country.

“The result of that is a bill before the National Assembly, a supplementary bill. The purpose is to present some of the needs of the military and other security agencies to beef up our response.

“I can assure you that soon, the issue of insecurity will be a thing of the past. We will all live in peace and prosperity in this country.”

The VP advocated vigilance at the local level, noting that most of the troubling issues occur in communities. 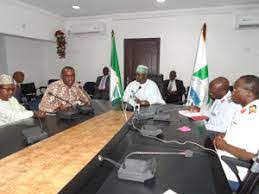 The Human Rights Writers Association of Nigeria (HURIWA), has called on President Muhammadu Buhari to constitute an independent investigative commission to probe the allegations that security operatives collude with bandits as raised by Kaduna-based Islamic scholar, Sheikh Ahmed Gumi.

HURIWA made the call in reaction to Gumi’s claims that the Nigeria Police Force, and the Army were colluding with bandits.

The rights group urged the NPF and the Nigerian Army to investigate probe the allegations.

The Nigerian Army, however, denied the allegation, while warning Gumi against making such claims.

But the Kaduna-based cleric insisted that some bad eggs in the security system were aiding banditry with weapons and drugs.

Reacting to the allegation, the HURIWA said the security agencies should “cover their faces in unmitigated shame for their shameless cowardice and pampering of the Kaduna Islamic cleric Ahmed Gumi, who continues to defend terrorists and flouting with reckless abandon, the Nation’s anti-terrorism law which prohibits aiding and abetting of terrorists.”

In a statement by its National Coordinator, Comrade Emmanuel Onwubiko, and the National Director of Press, Miss Zainab Yusuf, HURIWA dismissed as puerile, infantile, irrational illogical and cowardly, the official responses to the damaging allegations made by Gumi by the Army and police about the unholy communion between security forces and the terrorists terrorizing the whole of North-West carrying out a rash of kidnappings and killings.

Stressing that there are no smokes without fire, HURIWA said, “Whereas Sheikh Gumi has consistently accused the security forces of working with the terrorists, neither the Federal Government nor the security forces have instituted legal action against the prominent Kaduna based Islamic cleric who is credited by even the National Security Adviser of having unfettered access to the terrorists in the North-West of Nigeria.

“With his acclaimed access to the terrorists, is it not conceivably possible that he has some intelligence alluding to a possible unholy alliance between security forces and the terrorists?

“This clear display of unprofessionalism and cowardice by both the Army and police shows that after all, these allegations that the security forces work with terrorists deserves the most forensic and independent investigations.

“Dismissing these allegations with a mere wave of hands as have been done by the police and Army is totally unacceptable.”

The rights group then compared the tepid reactions of Army and police to Gumi’s “very elaborate accusations to the childish cries of the ‘Chihuahua pet dog.’

HURIWA said it does not make any sense that a person with considerable knowledge about the workings of terrorists in the North-West otherwise called armed bandits by the government has made such a major damaging claim of criminal collusion between security forces that ought to protect the territorial integrity of Nigeria and terrorists threatening national security, and the best response we can get are the childish cries from Army spokesman and the police.

“This is a crying shame,” HURIWA insists. 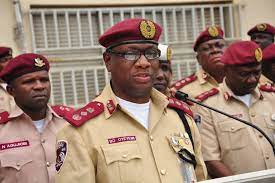 This is contained in a statement by Corps Public Education Officer, Bisi Kazeem, yesterday, in Abuja.

He said the attention of the FRSC had been drawn to an online publication misinforming the public about the release of shortlisted names for recruitment.

“This is to let the public know that the corps is presently not recruiting neither is there any shortlisted candidates list published on any platform whatsoever.

“Our recruitment processes have always been transparent, credible and made public through adequate placements of advertorials and notifications on all available media platforms.

“This includes our website: www.frsc.gov.ng, our social media handles and the National Traffic Radio 107.1FM,’’ he said.

Kazeem advised members of the public “to desist from any form of engagement with the purveyors of misinformation and outright disinformation as the corps will not be liable should anyone fall victim’’.