Borno
The Borno-based vigilance group, the Civilian JTF, has
called on the 7 Division, Nigerian Army, to relax the curfew in Maiduguri, to enable it contribute more in checkmating suspected terrorists.
The Legal Adviser to the group, Mr Jubrin Gunda, who made the call while addressing newsmen recently in Maiduguri said relaxing the curfew would enable members of his group to keep a 24-hour vigil on major roads leading into the city.
“We want to appeal to the 7 Division of the Nigerian Army and the state government to please review or lift the current 7 p.m. to 6 a.m. curfew in Maiduguri. We believe that the curfew has given individuals with bad intention easy access to the state capital as our members have been kept away,” Gunda said.
He said that the vigilance members would have done their bit to prevent the January 14 blast if they had been allowed to keep a vigil.
Ekiti
A sanitary officer in Ikole Local Government Area of
Ekiti State, Mr Michael Olagbaju, has warned inhabitants of the area to avoid drinking unwholesome water to avert water-borne diseases.
Olagbaju, who gave the warning last Thursday in an interview in Ikole advised the residents to ensure that they got water from good sources, stressing that water-borne diseases were often rampant during the dry season.
“Unwholesome sachet and bottled water should be rejected and people should check for NAFDAC number and origin of such bottled or sachet water before buying. Water from river, untreated wells and other doubtful sources should be boiled properly before drinking,” she said.
Olagbaju called for regular sanitary inspection in every part of the local government area to ensure healthy living among the residents and urged the people to provide health officers in their communities with information on any health challenges to enable them to take prompt action in addressing such challenges.
FCT

The Copyright Society of Nigeria (COSON) says the Na
tional Broadcasting Commission’s (NBC) decision affirming COSON’s legality to collect royalties on behalf of musical artists is a victory for stake holders in the industry.
Chairman of the Society, Chief Tony Okoroji, who made the declaration in a statement signed by COSON’s Senior Executive, Media, Miss Mayree Uket, last Thursday in Abuja, said that the declaration over the dispute in the broadcast industry was a boost to the industry.
Okoroji said respect for intellectual property rights would benefit the music, film or literary industries in the country and expressed optimism that the NBC’s decision would make the broadcasting stations become centres of profitable, marketable and exportable programming, instead of just being sellers of air time.
Gombe

No fewer than three villages will be relocated to protect
residents from environmental hazards, as a result of the expansion of the Ashaka Cement Company in Gombe State.
The company’s General Manager, Projects, Mr Tony Okpara, disclosed this in Ladde-Bage village of Funakaye Local Government Area of the state recently during the foundation-laying ceremony of some projects.
He named the three communities as Lariski, Darumpa and Malari, and said the company was preparing to spend N262 million on the relocation.
The General Manager said the amount would be spent on the construction of 55 houses, three blocks of classrooms, clinic, mosque and three boreholes for the affected communities.

Jigawa
No fewer than 11 persons have been killed by cholera
outbreak in Jigawa State, the Commissioner for Health, Dr Abubakar Tafida, has said.
In a statement signed by the Public Relations Officer in the state Ministry of Health, Malam Mati Ali,  recently in Dutse, said that a total of 153 cholera cases were reported in the state from January 1 to date.
The statement said that the cholera cases were reported in Taura, Birnin Kudu, Garki, Ringim, Babura and Gwaram local government areas of the state, adding that the situation was currently under control.
Kaduna

Wife of the Vice President, Hajiya Amina Sambo, has
described Theatre and Performing Arts as tool for addressing socio-political and economic issues in the society.
Sambo made the remark recently at the inauguration of the Centre of Excellence on Development Communication at the Department of Theatre Arts, Ahmadu Bello University (ABU), Zaria.
The VP’s wife, who was represented by wife of Kaduna State Governor, Hajiya Fatima Yero, said the disciplines had pushed forward messages that promoted good relationships, peace, understanding and scholarship.
“Perhaps that explains why ABU through the department of theatre and performing arts has been engaging communities, especially women and children since its inception in 1975. This is evident in the impact the products of the institution are making in the country and beyond,” she said.

A Non-Government Origination, Youth Advancement
Organisation of Nigeria, says it has intensified its campaign on malaria prevention and diarrhoea management in rural areas of Kebbi.
The Project Director, Alhaji Haruna Alkassim, who made this known in an interview in Birnin Kebbi last Thursday, said that the campaign was being conducted in collaboration with the United States Agency for International Development (USAID).
He said that funding from USAID was utilised to promote child survival interventions, nutrition, breast-feeding, malaria and diarrhoea prevention, treatment and management.
Alkassim said that 150,263 people had been enlightened on the prevention of the diseases in 15 local government areas from January 2013 to date.

The Attorney-General of Lagos State, Mr Ade Ipaye,
has stressed the need for a conducive working environment for judges, in order to enhance smooth dispensation of justice.
Ipaye spoke during a valedictory court session held at the Federal High Court, Lagos, in honour of retired Justice Marcellus Awokulehin, who bowed out last Thursday.
According to Ipaye, inadequate working tools and power failure are also now common place in the courts, adding that it constituted a major draw back to the productivity of judges.
“There are harsh working conditions for our judges in the courts and this is almost becoming a norm. Cases of congested courtrooms, inadequate working tools, power failure, are almost becoming normal, and this is very unacceptable”, he said.
Nasarawa

A youth advocate in Keffi, Nasarawa State, Mr Monday
Adamu, last Thursday called on the state government to initiate more youth programmes to reduce youths’ restiveness and other vices.
In an interview in Keffi, headquarters of Keffi Local Government Council, he warned that government should not concentrate on developing the towns, while the villages were suffering.
Another youth, Mr Bala Bernard, also urged the state government to delegate its officials to visit villages and communities to know the state of infrastructure.
He said that it was necessary for government to know the state of the facilities with a view to improving on them and ensure even development.

The Ondo State Government last Thursday called on
contractors handling road projects in the state to ensure completion of the projects on schedule.
The state Commissioner for Works, Mr Gboye Adegbenro, who made the call in Akure when he spoke to the contractors and consultants handling the jobs said the state government was “in a hurry to deliver all the road projects to the benefit of the people of the state”.
“Our target now is to complete all ongoing roads projects in the three senatorial districts of the state this year. Some of the roads will be commissioned in this first quarter of the year,” he said.
Responding, the manager of CGC Nig. Ltd, Mr Li-Hung Guang, who spoke on behalf of the contractors, assured the commissioner that they would deliver on their jobs according to specifications.

The Archbishop of Ibadan Catholic Diocese, Alaba Job,
is set to retire from service after 43 years. His successor, Archbishop Gabriel Abegunrin, would be installed on January 24.
The Chairman, Central Planning Committee for the installation of Abegunrin, Rev. Fr. Felix Ethapemi,  disclosed this at a news conference held at St. Mary’s Cathedral, Oke-Padre, Ibadan, last Thursday.
He said that having attained the canonical retirement age of 75 years on October 29, 2013, Job had applied to Pope Francis 1 for retirement disclosing that the Pope, had approved his application and appointed Abegunrin to succeed him.
Ethapemi said that Abegunrin would retain his administrative duties as Bishop of Osogbo Diocese until a new bishop was appointed. 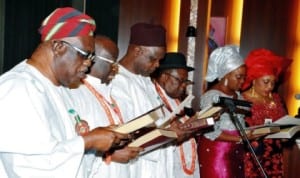 A cross section of members of the Federal Character Commission Board taking their oath of office during the inauguration of the board by President Goodluck Jonathan in Abuja, last Wednesday. Photo: NAN.