The Federal Ministry of Agriculture last Monday distrib
uted 180 knapsack sprayers to maize farmers in Benue.
The Coordinator of the ministry, Mr Benjamin Kuleve, who performed the exercise, said the gesture was a deliberate policy of the Federal Government to encourage farmers, especially the youths.
Kuleve urged the beneficiaries to make judicious use of the knapsack sprayers to complement the already existing efforts by the state government to take agriculture to enviable heights.
The Chairman, All Farmers Association of Nigeria (AFAN), Mr Aondona Kuhe, thanked the Federal and State Governments on their efforts to boost agriculture in the country and that the association would monitor and ensure that the knapsack sprayers were used only for the purpose they were intended.

Governor Kashim Shettima of Borno State has promised
to complete all ongoing roads and other projects in the Gwoza Emirate of the State.
Shettima made the promise when members of the Gwoza Elders Forum paid him a courtesy visit in Maiguguri on Monday to thank him for elevating the Emir of Gwoza to first class status.
Ekiti

The National Conscience Party (NCP), has declared its
readiness to participate in the governorship election in Ekiti State in June.
The National Chairman of the Party, Dr Tanko Yinusa dropped the hint at the Special Convention of the State chapter of the party in Ado-Ekiti on Monday.
According to him, the NCP, in continued pursuit of the vision of its founder father, late Chief Gani Fawehinmi, would strive to eradicate poverty
.
FCT

The Chief of Defence Staff (CDS), Adm. Ola Ibrahim, has
commended the U.S and other countries for their support in combating terrorism within Nigeria and the sub-region.
Ibrahim made the commendation at the opening of a Workshop on Counter Insurgency and Counter Terrorism in Abuja on Monday.
“It is indeed gladdening to see the armed forces of Nigeria getting immense support from the United States as well as other countries towards defeating terrorism within Nigeria and the sub-region.’ “The recent joint exercises with navy along our coastal belt and training exercises with the army will attest to the collaboration towards building capacity of the armed forces’’, he said.

The Police in Gombe State said it arrested six persons in
connection with the death of Alhaji Adamu Yusuf and Alhaji Umar Makama in Gombe metropolis on Dec. 31, 2013.
A  statement signed by the Police Public Relations Officer (PPRO) in the state, Mr Fwaje Atajiri, in Gombe on Monday. The statement said the suspects were helping the police in the investigation.
“The police wish to make it clear that it is poised to deal decisively with any form of thuggery, politically motivated violence and social miscreants, according to the law. “In the same vein, their sponsors will also face the full wrath of the law as no individual is above the law of the land,” the statement added.

The Kano State Government has donated N3million to the
state chapter of the Nigerian Legion as part of preparations for this year’s Armed Forces Remembrance Day.
Governor Rabiu Kwankwanso announced the donation Monday, at the launch of Emblem Appeal Fund at the Government House, Kano.
The governor, who was represented by the State Commissioner for Information, Dr Umar Faruk, said the donation was aimed at assisting the ex-service men in the state and appealed to the ex-service men to remain committed and patriotic towards national co-existence.

The Nigeria Postal Service (NIPOST) in Katsina State
has threatened to withhold mails of the 34 local governments in Katsina State for allegedly failing to settle their debt for the past three years.
The NIPOST Manager in Katsina, Mr Alex Bature, told newsmen on Monday in Katsina that the debt amounted to N3 million.
Bature said although NIPOST was not a profit-making agency, there was need for individuals and organisations to pay for the services rendered to them “to enable us to settle our financial problems”.
The manager also said that NIPOST would organise a programme to enlighten students on the importance of postal services noting that the state Ministry of Education had made it mandatory for schools to embark on excursion to the agency.
Kwara

Governor Abdulfatah Ahmed of Kwara State has urged
Muslims to imbibe the virtues of Prophet Muhammad as they mark the birth of the Holy Prophet.
A  message to mark Eid-El-Maulud, issued by the Chief Press Secretary to the governor, Alhaji Abdulwahab Oba, on Monday in Ilorin quoted the governor as saying that the virtues of the Prophet were what endeared Him to humanity of all races and faith.
Ahmed also urged Muslims and Nigerians in general to use the occasion to reflect on the state of affairs in the country by praying for good governance and inter-religious harmony.
He added that “Nigerians, irrespective of our religious and ethnic diversity, must at occasions like this, reflect on issues that can strengthen our nationhood and He reiterated his administration’s commitment to ensure equity and justice in the pursuit of programmes that would enhance the welfare of the people.

Chief Magistrates’ Court last Monday sentenced a 26-
year-old labourer, Salisu Umar to 10 years imprisonment for raping in Minna, a 4-year-old girl contrary to Section 18 of the Child’s Right Law of Niger State.
The Police Prosecutor, Insp. Ahmed Saidu, told the court that one Ayuba Tanimu of Abdulsalam Quarters reported the case at the police station on January 8.
Saidu said that the convict, a resident of Peter Sarki Road Minna, took the complainant’s daughter to an uncompleted building and had sexual intercourse with her.
In his ruling, Magistrate Abdullahi Usman sentenced the labourer to 10 years imprisonment without an option of fine and ordered that the convict to pay a compensation of N50, 000 to the parents of the minor.

The All Progressives Congress (APC) in Osun State, last
Monday said the achievements of Gov. Rauf Aregbesola would ‘speak’ for him in the campaign for the forthcoming governorship election.
The State Director of Publicity, Research and Strategy of APC, Mr Kunle Oyatomi, said in Osogbo, that the governor would not involve himself in any campaign of calumny but would showcase the good works he had done since the inception of his administration in 2010.
The director listed the major achievements of the governor to include stoppage of perennial flooding which had caused incalculable damage in some parts of the state.

The President, Catholic Bishops Conference of Nigeria
(CBCN), Archbishop Ignatius Kaigama, last Monday said the national dialogue committee inaugurated was a right step in right direction.
Kaigama, who is the Catholic Archbishop of Jos, said this at the closing ceremony of the 42nd National Laity Council Conference of the church.
He said that the dialogue would enable Nigerians to sit and discuss their future as a nation.
“I hope that the national dialogue will be genuine enough and will not be turned to a mere national conference of leaders which will end up as an academic exercise,’’ he said.

Youths in Damaturu last Monday appealed to the Yobe
State Government to extend the state empowerment programmes initiated in 2013.
Aliyu Kaku, an unemployed graduate and beneficiary of the programme said:”the programme had provided graduates with a means of livelihood.
Usman Buba, an NCE graduate called on the state government to concentrate on youth empowerment in 2014, with a view to finding solution to the challenges in the state. 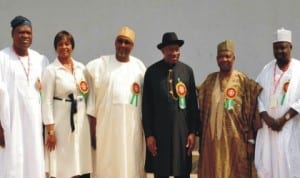 President Goodluck Jonathan and Vice President Namadi Sambo with members of the National Pension Commission Board after the inauguration of the board by the President in Abuja last Wednesday. Photo: NAN