Governor Peter  Obi of
Anambra State has laid the foundation, and also presented cheques for the construction of 10 Maternity and Child Health Centre in remote parts of Anambra State.
Laying the foundation for those sited at Awba-Ofemili, Urum and Ugwuagba Obosi, the Governor said that the foundation for the other sites at Umunze, Umuchu, Iseke, Ugwuaniocha, Umudioka, Umueje and Azigbo would soon commence.
Obi said the funds for the 10 maternities came from the prize money the state received for coming first in the recent Bill and Melinda Gates award, for being the best state in the South-East in eradication of polio, which the state matched.
He also explained that the idea of building the maternities in collaboration with the Church was because the partnership with them is working.
“We have been collaborating with the Church to serve our people, and I can tell you the result has been wonderful.  We shall keep it up”, Obi said.
The Governor presented Cheques of N30m each to the collaborating Bishops of the three sites which foundation have been laid.
Shortly after laying the foundation for the project at Urum, Obi also visited the Masdeva Farms, Urum, where he presented Cheque of N50m and a patrol vehicle to the farm, modeled after Songhai farm in Benin Republic, the owner of the farm, the Catholic Diocese of Awka represented by Bishop Ezeokafor, accompanied by the Manager of the Farm, Rev. Fr. Sabastine Anokwulu thanked the Governor for his wisdom and thoughtfulness.
As part of the laying of the foundation of the Awba-Ofemili maternity the Governor also flagged-off the construction of the Nnam bridge, costing the State over 500 million naira.  The Governor who noted that earlier bridge at Ebenebe, which cost the State over  N1billion, while the entire road, of  36 kilometers, passing through Amansea, Ebenebe, Ugbene, Ugbenu, and Awba-Ofemili will cost  over N10 billion.
In his speech, the Anglican Bishop of Awka, the custodian of the maternity at  Awba-Ofemili thanked the Governor for giving rural communities in the State a sense of belonging and assured him of the continued support of the Church, even as he prayed that Obi’s successor will follow his pattern of governance. 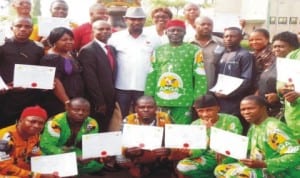