Katsina-Ala Local Government Council says it has started
the construction of rural roads to boost the transportation of farm produce from the council to urban markets .
The Chairman of the council, Mr Martins Agir, made this known during the ongoing accountability briefing for local government councils in the state.
Agir said his administration considered the construction of rural roads a priority, owing to the agrarian nature of the council, and disclosed that an ultra-modern yam market had also been constructed to boost its production in the area.
Agir, who expressed concern over the weak revenue profile of the council, said he dissolved the existing market committees and reconstituted new ones for the purpose of enhancing revenue collection.

The Borno State Government last Thursday said it planned
to recruit 100 fresh graduates to beef up the state civil service.    Governor Kashim Shettima made this known when he received a delegation of past labour leaders in the state at the Government House, Maiduguri.
Shettima explained that the objective was to fill the existing vacancies at the middle cadre level in the service due mainly to retirements and death of civil servants.
A onetime president of the Nigeria Labour Congress (NLC), Comrade Ali Chiroma, who led the delegation, commended the governor for his developmental projects in spite of the prevailing security challenges facing the state.

The Ekiti State House of Assembly last Thursday passed
three bills aimed at strengthening the judicial process in the state. The bills were the “Ekiti State Administration of Criminal Justice Bill 2014’, “Ekiti State Arbitration Bill 2014’ and “Ekiti State Law Reform Commission Bill 2014.
The Chairman, Committee on Judiciary and Legal Matters, Mr Segun Erinle, presented the three reports of his committee on the bills before they were considered and passed.
Welcoming the lawmakers to the new year, the Speaker, Adewale Omirin, thanked them for their patriotism which he noted translated to making laws that brought dividends of democracy to Ekiti citizens.

Senate President, David Mark, has called for the adoption
of a global approach to tackle terrorism in order to end the menace threatening world peace.
Mark said in Abuja when he played host to the British Parliamentary under- Secretary for Justice, Mr Jeremy Wright said that world leaders must come together to work out a blueprint to fight terrorism.
He noted the growing trend and spread of terrorists across the globe and canvassed for collaborative efforts to end the menace.
Gombe

The National Population Commission (NPC) last Thurs
day said it had registered 102,140 births in Gombe State in 2013.
The NPC Commissioner in charge of the state, Alhaji Bala Magaji, said the enlightenment programme of the commission had helped in eliciting positive response as more now registered their newly born babies.
He said the commission was also issuing attestation certificates to support the declaration of age and birth certificates of people above 17 years.
“Attestation certificate is equally universally accepted and it attracts only N2, 000. It is important for everybody to obtain it,” he advised.
Kano

The Harmattan season has brought some measures of ru
ral life to the metropolitan Kano city as many residents now converge at fire hearth to fight cold.
Residents now use firewood and charcoal to make fire to warm themselves and boil water for bath.
In the early morning and evening at Sabongari, Nasarawa and Fagge areas of the Kano State metropolis, people squat in groups around fire at tea shops and courtyards as “Majalisa” and chat heartily.
Commenting on the development, Mohammed Bello, a Nigerien who sells tea at Fagge, Kofar Mata, said that business had improved because some people drink tea (shayi) while warming themselves.
Kaduna

The Kaduna State House of Assembly last Thursday sus
pended its member, Dr Shehu Adamu, for six months over allegation of N180 million bribe levelled against other members.
The decision followed a motion by Alhaji Muhammad Ali, (Kawo – PDP), who drew the attention of members to an interview granted by Adamu, (Maigana-APC), where he made the allegation.
Adamu had in an interview on September 23, 2013 in the electronic media and national dailies, accused members of collecting bribe of N10 million each to remove the former speaker, Usman Gangara and other principal officers.
On November 6, 2013 when the motion was moved by Ali, the assembly mandated its Committee on Ethics and Privileges to investigate.gation.

Governor AbdulFatah Ahmed of Kwara State has consti
tuted a committee on job creation.
Inaugurating the committee last Thursday in Ilorin, the governor said his administration had put ‘necessary machinery in motion’ to create jobs for youths in 2014, and said the committee would work out modalities for the establishment of job intervention initiative tagged “QuickWin’’ programme.
Ahmed said his administration was determined to get more young people into employment this year, noting that government would also facilitate the training of some youths and offer credit facilities to others who might wish to start their own business.
Lagos

Lagos State President of the Environmental Health Offic
ers Association of Nigeria (EHOAN), Mr Akin Akingbehin, has advised operators of eatery houses to ensure that their staff are medically fit.
Akingbehin said last Thursday in Lagos that it was important to get the potential workers examined, to ascertain their health status before being employed by fast foods operators.
According to him, the potential workers must also meet certain requirements necessary to prevent the transmission of communicable diseases.
He advised eateries’ operators to adhere strictly to the stipulated laws guiding the operation and standard of eatery business and told them to be mindful of the impact of their waste generation on their immediate environment.

Niger State Government said it spent over N477.6 million
on the settlement of WASCE and NABTEB registration fees for the final year students in public schools in the state last academic session.
The state’s Commissioner for Education, Alhaji Danladi Abdulhameed who, stated this in Minna last Thursday during an interactive session with newsmen said that under the state’s free education policy, the government pays one public examination fees for students in the state, while the parents pay for the other.
He said most parents preferred paying the National Examination Council (NECO) fees while the state government settled WASCE fees and other examinations.
Osun

The Director of the Centre for Distance Learning, Obafemi
Awolowo University, Ile-Ife, Prof. Bode Asubiojo, has described distance learning education as a viable alternative.
Asubiojo said in an interview last Thursday in Osogbo that distance learning education was the only way to curb the desperation for admission into universities among school leavers.
The don cited the example of some prominent Nigerians who did not have university education through the conventional classrooms but became educated through distance learning.
He, however, stressed the need for operators of distance learning initiatives to adhere to international best practices in the delivery of programmes.

Wife of Oyo State Governor, Mrs Florence Ajimobi, has
received books worth N5 million from Heinemann publishers to complement her ‘Educate a Rural Child’ (ERC) project.
Senior Special Assistant on Social Welfare, Mrs Sandra Kolade, who received the books on her behalf, said that the books would be distributed to ERC intervention primary schools, as library resource materials.
She reiterated Ajimobi’s commitment to taking qualitative education to children in the rural areas and promised that all the books would get to the right places.
Chairman, Heinemann, Mr Ayo Ojeniyi, noted that books were indispensable tools to education, stating that primary education should be accorded priority as the foundation on which other phases of education rested.

The Chairman of Plateau State Independent Electoral Com
mission (PLASIEC), Mr Peter Dalyop, last Thursday announced that six political parties had been cleared to contest the January 30 council elections.
Dalyop hinted the political parties as; All Peoples Grand Alliance (APGA), Democratic Peoples Party (DPP), Peoples Democratic Party (PDP), Labour Party (LP), Peoples Democratic Movement (PDM) and All Progressives Congress (APC).
He told newsmen in Jos that he was satisfied with the screening and clearing of candidates of the political parties, adding that the candidates list would be released on Monday.
Taraba

The National Emergency Management Agency (NEMA)
lastThursday donated relief materials to victims of state of emergency in neighbouring Borno, Yobe and Adamawa, taking refuge in Taraba.
The Agency’s Director-General, Alhaji Muhammed Sidi, donated the materials in Jalingo, on behalf of the Federal Government.
Represented by the head of Gombe State Operations Office of the Agency, Mr Appolos Jediel, Sidi said the gesture was aimed at alleviating the sufferings of the victims, adding that the donation was in response to the request for assistance by the Taraba State acting Governor, Alhaji Garba Umar. 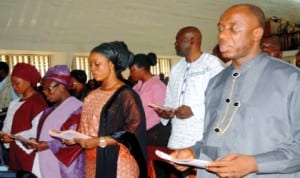