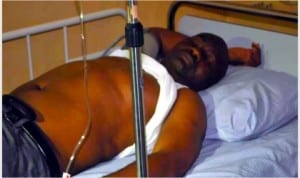 Senator Magnus Abe in critical condition at the emergency unit of Kelsey Harrison Specialist Hospital, after the police attack at the Save Rivers Movement rally in Port Harcourt, yesterday.