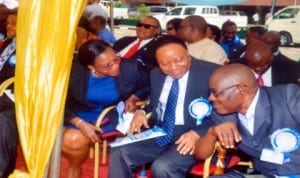 The National Drug Law Enforcement Agency, (NDLEA) has arrested a 58-year old man, Odunayo Ayodele Owoseni, at the Port Harcourt International Airport, Omagwa for trafficking in substances suspected to be Cocaine.
The suspect was arrested on the December 31, 2013 at the screening section of the Airport while trying to board an Air France flight to Dublin.
The suspect, who hails from Okene Local Government Area in Kogi State, was arrested with 115 wraps of substances suspected to be Cocaine, weighing 1.493 kilogrammes.
The Director of the National Drug Law Enforcement Agency, Olutekunbi Davies said about 60 suspected drug traffickers had been arrested since his deployment to the airport two years ago.
He said the NDLEA was challenged by the delay in the renovation work at the Airport, and the rowdy environment, which had affected the agency in effectively carrying out its duties.
He appealed to the Federal Airport Authority of Nigeria (FAAN) to allocate a space in the terminal building to NDLEA to enable its operatives function effectively.
Speaking in an interview with newsmen, the suspect, Mr. Owoseni regretted his involvement in the drug trafficking deal.
He said he was introduced to the drug business by one Mr. Shola.
The suspect confessed his involvement in the drug deal, and disclosed that he had been separated from his two wives and children who are presently resident in the United States.
Meanwhile, the National Drug Law Enforcement Agency (NDLEA) yesterday  arrested a suspected fake currency trafficker with $240,000  (about N37.2 million), at the Murtala Muhammed International Airport in Lagos.
This was contained in a statement signed by the NDLEA spokesman, Mr Mitchel Ofoyeju, which was made available to newsmen in Lagos.
The statement said that the suspected fake currency was concealed inside dictionaries.
It said the suspect, a 39 year-old Congolese who claimed to be a fashion designer, was caught while attempting to export the suspected fake dollars to Congo-Kinshasa, through the Cargolux airline.
The statement said that the NDLEA commander at the Airport, Mr Hamza Umar, said that the seizure was made following the suspicion of the consignment.
“The suspect, who hails from the Democratic Republic of Congo, brought a sewing machine and a bag containing clothes and five dictionaries for exportation to Congo-Kinshasa.
“There was high suspicion of the consignment and when it was subjected to a search, the dictionaries were found to contain 24 envelopes containing $10,000  each’’ it said.
The statement said the suspect, who is a divorcee and mother of two, in her statement, said the dollars were given to her by her boyfriend.
It quoted the suspect as saying: “I am a fashion designer from DR Congo. I have two children but my husband and I have separated.
“I came to Nigeria in search of greener pastures in 2006. It was my boyfriend that gave me the dictionaries to send to the Congo.”
The statement also quoted the Chairman and Chief Executive of the NDLEA, Ahmadu Giade, as describing the discovery as a big boost for airport and border security in the country.
Giade said that criminal groups were fast becoming inept, based on the NDLEA’s superior search operations.
He disclosed that after preliminary investigations, the suspect would be transferred to the Economic and Financial Crimes Commission for further investigation and legal action.