The Rivers State Governor,
Rt Hon Chibuike Amaechi has praised civil servants in the state for the enormous sacrifice they have made towards the development of the state.           Speaking at the 2014 Annual Civil Service Thanksgiving and Dedication Service tagged, “Faithfulness in Service”, held at the state Secretariat Complex last Wednesday in Port Harcourt, Amaechi said that the sacrifice so far made by the civil servants is worth the while as it has contributed in the transformation of the state.
Amaechi promised that for now, the administration was poised to improve the lots of Rivers people, adding that, “what is important to us now is that faces of Rivers people must change”. Against this backdrop, he assured that government will no longer deduct the salaries of civil servants, while thanking them for the support his administration has enjoyed from them.
He, however, emphasized that civil servants owe service to the people as that is one way to sustain the tempo of development in the state, while promising to fund training and re- training progammes for public servants, including repairs of some parts of the secretariat complex for a better working environment.
Listing some of the reforms his administration has initiated into the public service in the state, Amaechi submitted that so far the number of female permanent secretaries has risen, introduction of a free and fair selection process for top civil servants and the employment of more doctors and teachers.
The governor later promised a N300million Christmas and New Year gift to all civil servants, which he said, will be disbursed through the Office of the Head of Service.
Earlier, Head of Service, Barrister Samuel LongJohn had noted that the programme was an  annual activity to re-dedicate the civil service into the hands of God.
He used the occasion to call on civil servants to commit themselves to their duties and shun all forms of indolence and corruption.
The same view was re-echoed by Chairman of the Rivers State Civil Service Commission, Sir Ngo Martins- Yellowe.
While reflecting on the achievements of 2013, he harped on loyalty and commitment to duty by civil servants.
In his sermon, Dean, Bonny Archdeaconry of Niger Delta in the Anglican Communion, Very Rev. Ibitoru Hart reasoned that the theme was a fresh call to duty, dedication and fidelity in service,
“Now that another year is inaugurated before you, by extension, you are serving God through the civil service”, he remarked. 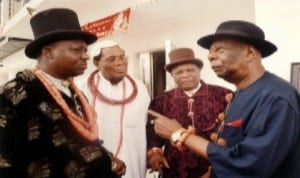