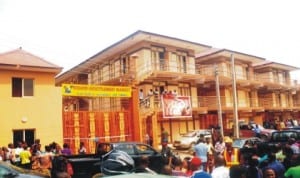 Nigeria and the State of Israel in Jerusalem on Monday signed a Bilateral Air Services Agreement (BASA) to pave way for direct flights between them.

The agreement is expected to pave way for direct flights between both countries on the principle of reciprocity by the designated airlines of both countries.

Before now, Nigerians travelling to Israel, including Christian pilgrims, stopped over in neighbouring countries before being finally transported to their destination.

Onwuliri said after the signing of the agreement that the accord would deepen bilateral ties between both countries and boost their economies.

“The agreement will augur well for movement of persons, our pilgrims, businessmen, academics, the civil society and students.

“Many of our people also come here to benefit from the technology of Israel,” she said.

The minister also said that the agreement would make enormous impact on trade and investment, agriculture, construction, tourism, security and capacity building.

Mr Zeev Elkin, who signed on behalf the State of Israel, noted that the visit of Jonathan to the country provided a great opportunity for the signing of the agreement.

The Minister of Aviation, Ms Stella Oduah, said the BASA agreement would be exploited to enhance the aviation sector.

he said that the aviation sector was already targeting the operation of daily flights to Israel.

In a remark, Mr John Kennedy Okpara, Executive Secretary, Nigerian Christian Pilgrims Commission, said the agreement would reduce the number of hours that pilgrims spent on flights and cut costs.