A Director in the Livestock and Veterinary Services of the Rivers State Ministry of Agriculture, Dr Allswell Emejuru, has condemned the painful process of killing animals for consumption.

Dr Emejuru, who spoke to our correspondent recently at a public function said animals to be slaughtered should be put through a painless process.

According to him, the ideal way was to put the animal through a process of “stunning”.

“You stun it so that it does not feel pain by using a hard object especially a hammer on the head.

He said this enables the animal to get weal and when a knife was put in the neck it does not feel any pain.

Dr Emejuru who is also the head of department of the unit said this process enables the animal to die quietly without struggling.

He explained that when animals were allowed to struggle before dying certain harmful chemicals are released within the body.

He said the process makes the meat quality poor adding that when the animal dies quietly, it improves the quality of the meat.

“The way in which an animal is slaughtered has a role to play in the keeping quality of the meat.

“It is cruelty really to put animals through stress and struggling, infact it is wickedness”, he said.

He further explained that animals due for slaughtering should be allowed to rest for at least 24 hours.

“Animals to be slaughtered should be kept in a quiet place so that the meat would be good for human consumption”, he said.

He lamented the practice were animals are wrestled with and thrown violently on the ground before killing.

The ideal thing according to him was to make sure the animal was not conscious that it would be killed.

He said this was because like man every animal knows that it would eventually die.

While condemning the poor sanitary conditions of some slaughter houses, he added that when animals were properly killed it enables the heart to beat faster and the animal bleeds freely and all the blood  would flow out and the meat will “keep” well. 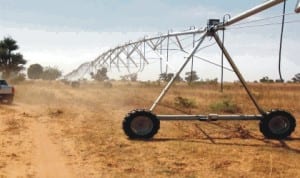 One of the Centre Pivot Irrigation Equipment being installed by an American agro firm at a farm site on Maiduguri-Kondaga Road under the Borno State agricultural transformation programme last Monday. The unit moves in circle to water crops in dry season. Photo: NAN