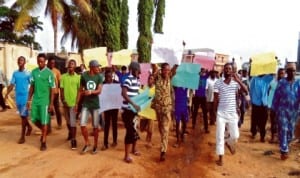 The Federal Government has indicated its willingness to drive indigenous and foreign investments into the country’s oil and gas sector following frameworks set up in 2013.

This, according to government sources, is targeted at ensuring that investment potential of the sector is fully tapped into, owing to the growing global competitiveness of the energy business.

“As the nation’s number one representatives abroad, you deserve to know the activities of the NNPC so as to disseminate the right information at your various missions especially in the area of attracting Foreign Direct Investment,” the GMD said.

He added that the doors of the NNPC would always be opened so as to enable the Corporation share valuable information that will boost the nation’s revenue in the entire hydrocarbon value-chain of the country.

The Federal Government, in 2013, also opened the second oil marginal fields licensing round aimed at deepening the participation of indigenous oil companies in the upstream sector of the oil and gas industry.

The Minister of Petroleum Resources, Mrs. Diezani Alison-Madueke, who declared the bid round open, stated that it is designed to boost the participation of Nigerian indigenous companies in the upstream and to generally increase exploration and production activities in the oil and gas sector to the benefit of Nigerians and the Nigerian economy.

Giving details of the licensing round, Alison-Madueke stated that a total of 31 fields are on offer with sixteen of them located onshore, while the remaining fifteen were in the continental shelf.

The Minister who said the Federal Government is committed to transparency in the bid process also encouraged companies indicating interest in the assets to form consortia that would enable them leverage upon each other’s strengths.

“Over the next two weeks, the Department of Petroleum Resources will undertake a road show to different parts of the country about the programme. This will be followed by a three and a half-month of competitive bidding process in line with the Federal Government’s commitment to openness and transparency in the conduct of business activities in the country,” Alison-Madueke said.

Giving an update on the last marginal fields bid round which held in 2001, the Minister disclosed that of the 24 fields that were allocated to 31 indigenous oil companies in that exercise, eight were already producing while the others were at various stages of development.

Alison-Madueke noted that the marginal field operators who currently account for about one per cent of the nation’s production have also recorded huge discoveries in excess of 100 million barrels to the nation’s reserve base, adding that of the eight assets that have so far been divested by the International Oil Companies, at least four are held by active marginal field operators, who have continued to demonstrate remarkable technical ability in operating significantly larger assets.

“In their operations, the companies have addressed corporate social responsibility as a critical element, by providing for stakeholder participation as part of their success factors,” she said.

AWS security audits are important for any organization looking to assess its IT Security. AWS security audits involve both a technical and non-technical review of all major systems, networks, databases and applications. The audit also includes an assessment of the organization’s risk tolerance level in order to prioritize remediation efforts.

This blog post will provide you with some tips on things to keep in mind, a checklist, and tools and processes that your company can use for performing security audits on your AWS environments.

A security assessment is not a single snapshot of the environment. It’s an ongoing process that enables continuous monitoring, discovery and improvement by identifying vulnerabilities, threats or exposures to assets before they become issues.

This new service is a centralised location to monitor, track and act on all security-related events for your AWS environment. This includes notifications about third-party configuration issues with services like Elastic Load Balancing or Amazon API Gateway as well as vulnerabilities in other software packages running within ECWs (e.g., Apache Struts). Other data sources include the following: VPC flow logs, CloudTrail event histories, network ACLs/firewall rules around subnets etc. Run automated remediation tasks directly from this console when required too!

Get notified via email & Slack of critical changes to your systems that require immediate attention – e.g., an administrator has just deleted an important ECW or security group.

Get notified via email & Slack of unauthorised access to your SaaS services – e.g., someone has just launched a DDoS attack against one of the databases hosted on an RDS instance!

Periodically check that all CloudWatch alarms for metrics like “CPU usage” and “free EBS volume space” are working as expected. Automatically remediate if they’re not (e.g., launch another ECW, increase alarm thresholds etc.)! Or simply use Amazon Inspector which will do this for you automatically (see below).

This service provides deep insights into what’s running within any given AWS environment – including any vulnerable software packages or misconfigurations that could lead to a security breach.

This new feature allows you to validate configuration settings across all ECWs in an AWS account for services like Amazon SNS/Kinesis/DynamoDB and resolve issues before they affect production environments (e.g., workflows executed against the affected resources will fail if rules are violated).

Each of the above services/tools should be used to help you continuously improve your AWS security posture – by allowing you to identify & fix configuration errors before they affect production environments. If one service isn’t sufficient enough, simply use two or more in conjunction with each other!

If you want to be sure that your organization is safe from hackers, then it’s important to do an AWS security audit. A lot of companies are now realizing the importance of this and have been doing these audits as a precautionary measure. In today’s world where technology has taken over our lives, we need to make sure that we don’t make any mistakes with data security because there will always be someone looking for vulnerabilities in order to exploit them. So, keep your business safe!

The managing director of Port Harcourt refinery company (PHRC), Ahmed Dikko, says the support of host communities will contribute to the success of the rehabilitation of the refinery.
In May, the Nigerian National Petroleum Corporation (NNPC) commenced the rehabilitation of the Port Harcourt refinery in Rivers state.
This was after the federal executive council (FEC) approved the sum of $1.5 billion for the rehabilitation.
The repair, which will be executed by Tecnimont SPA, an Italian company, will be done in three phases of 18, 24 and 44 months, respectively.
Dikko, who said the PHRC is already engaging the host communities, expressed optimism that they will support the project.
“Host communities’ engagement is one of the key priorities for the success of this project and PHRC management recognises this right from the earlier days of the award of this contract and has done a lot in this regard through the public affairs,” he said.
“The first is to put out the information correctly about this project, and the second is to manage the expectations of the communities.
“The approach that we are using is to get the communities to buy into the project and be part of it. So much has been covered and I’m delighted with the way we are going. We are going to have the support of the communities.
“The contractors themselves have nominated a community representative that is working closely with our public affairs team in the manner to ensure that the right information is given to the communities.
“Everybody is part of the rehabilitation project, and in whatever department you are, you must contribute your own to make sure that we truly succeed.
“Whether you are in the human resources, engineering, or admin department; there is a role for you in the project, and I’m happy that the staff have taken it on, and are looking forward to the actual commencement of activities physically.
“We have gone further again to keep knowledge sharing so that everybody will understand clearly what the project is about, and also the scope of work that we want to do. That way, we’ll have a role to play as it goes on.”
Dikko also said the rehabilitation of the refinery will be completed as scheduled, adding that the contractors have been given what they need to get the project done.
“It is not a small thing knowing full well that all specs of all the equipment and everything therein that will make the contractor succeed have to be given; all the documentation that we have. So, we have done that; we’ve given thousands of documents to the contractor,” he said.

The Governor of the Central Bank of Nigeria, Godwin Emefiele, said that recalcitrant debtors have exploited the lack of prioritisation of credit recovery matters by the Nigerian judicial system to frustrate debt recovery efforts of financial institutions in the country.
Emefiele stated this at a workshop for judicial officers on recent reforms of the banking financial services sectors in Nigeria held in Abuja.
The Governor was represented by the Deputy Governor, Financial System Stability, CBN, Aisha Ahmad.
According to the Asset Management Corporation of Nigeria (AMCON), out of a total of N4.158trn bad loans, it has so far recovered over N1.48trn.
It still has 7,902 outstanding obligors with a total outstanding loan of above N3.1trn, while 350 obligors alone account for over N2.053trn, with more than 70 per cent of the total outstanding amount.
Emefiele disclosed the plan by the CBN to engage stakeholders in the Judiciary to enforce The Special Tribunal for the Enforcement and Recovery of Eligible Loans.
The Special Tribunal which is a provision of the Banks and Other Financial Institutions Act was introduced to accelerate credit recovery processes and enforcement of collateral rights.
Speaking on the significance of the BOFIA 2020, the apex bank boss said that the Act is expected to reinvigorate the Nigerian banking sector as it will engender a sound and stable financial system that will support sustainable growth and development of the Nigerian economy.
He said that the BOFIA 2020 also strengthens the Anti-Money Laundering and Combating Financing of Terrorism Framework by mandating regulated entities to comply with AML/CFT and cyber security regulations.
Emefiele also pointed out that the BOFIA contains provisions to effectively manage unclaimed funds or abandoned property in dormant accounts maintained with banks, specialised banks and other financial institutions, as well as recovery tools for failing banks.
BOFIA 2020 also provides enhanced recovery and resolution tools for failing banks.